AFRICA’S richest man, Aliko Dangote is set to invest in the Nigerian automotive industry with his decision to team up with Kebbi and Kaduna in bidding for a majority stake in Peugeot Automobile Nigeria (PAN) Limited.

National Daily gathered that both States and Dangote has already gotten the support of Bank of Industry, and have submitted bids for the stake which AMCON is offering for sale.
Nigeria’s state-backed AMCON “bad bank” had sometimes ago said that it plans to sell its majority stake in Peugeot Automobile Nigeria (PAN) Limited, a local joint venture with the major French automaker, and is seeking bids from investors.

Peugeot Citroen is the technical partner to the Nigerian assembly plant, which has capacity to assemble 240 cars a day, PAN said on its website.

In a statement, the Asset Management Corporation of Nigeria (AMCON) said it owned 79.3 percent of PAN Nigeria Limited, having acquired the stake four years ago after purchasing the company’s debt and taking some as equity.

PAN Nigeria Limited was set up in 1972 as a joint venture between the Nigerian government and France’s Peugeot, with an annual production of 90,000 cars by the 1980s.
But operations nosedived and the company accumulated bad loans shortly after the government sold its stake via a privatisation to local core investors in 2006.

AMCON said PAN Nigeria had assets totaling 24.96 billion naira ($125.43 million) as of December 2014 and equity of 11.98 billion naira, and was seeking investors with experience in automobile manufacturing to buy the stake on offer.

With this strategic partnership, Dangote is set to extend his business empire into the automotive sector which had recent times enjoy a boost from the Federal Government.

The government under a National Automotive Industry Development Plan has ordered local car distributors to come up with plans for new assembly plants, along with threats of imposing prohibitive import duties.

According to the governor of Kaduna State, a proposal to acquire the majority shares of the company had already been submitted to Assets Management Company of Nigeria (AMCON).

According to him, the step is part of efforts to revive ailing industries in the state to provide huge employment opportunities to the teeming unemployed youths in the region and Kaduna State in particular. He said that PAN, a critical partner in Kaduna State industrial history, had gone down from assembling 90,000 cars per annum to merely 200 a year.

“Our hope is that when we acquire the majority share of the company, we will restructure it to operate to full capacity of assembling between 90,000 and 100,000 cars yearly. 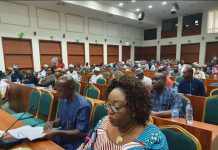