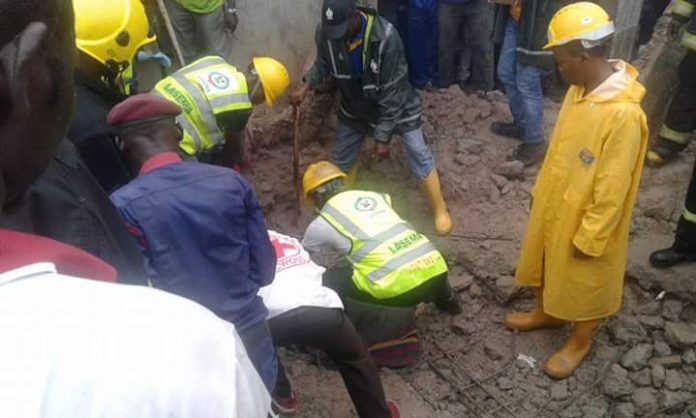 By OKOSUN DENNIS
A 5-year-old baby girl identified as Moyin was on Saturday rescued alive in a building collapse at Abule Egba, a Lagos suburb.
The incident took place at No 7 in Seidu Ekeleji Street, Alaro, Meiran,
Abandon – Oke Odo area of Lagos.
The mother and her two daughters, aged, 4 years and 2 years, according to neighbours, were washing cloth when the building collapsed, killing the mother and the 2 year old daughter.
It was learnt that an existing uncompleted bungalow under construction with sands and concrete block on the decking stage suddenly caved in with three people trapped under the rubbles. 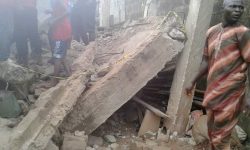 ALSO SEE: Defence HQs blames inappropriate area mapping for bombing IDP camp
However, due to the prompt response by emergency responders led to the rescue of a 5-year-old girl identified as Moyin.
She was immediately moved to General Hospital Ikeja by the Lagos State Ambulance Service, while two persons, a 30-year-old mother identified as Basirat and another daughter identified as Bisoye were both recovered dead.
Their remains were moved to the Mortuary by the State Environmental Monitoring Health Monitoring Unit (SEHMU).
LASEMA Response Unit, the Fire Unit, Lagos State Fire Services, Nigerian Police Force, LASAMBUS, RRS and Red Cross were all on ground to rescue victims.
The General Manager LASEMA, Mr Adesina Tiamiyu said proper investigation would be conducted on the incident by the appropriate agencies.
Public Affairs Unit, LASEMA, Kehinde confirmed the incident.
He however advised owners and developers of buildings in the State to adhere to building codes and physical planning laws of the State so as to advert unnecessary loss of lives.