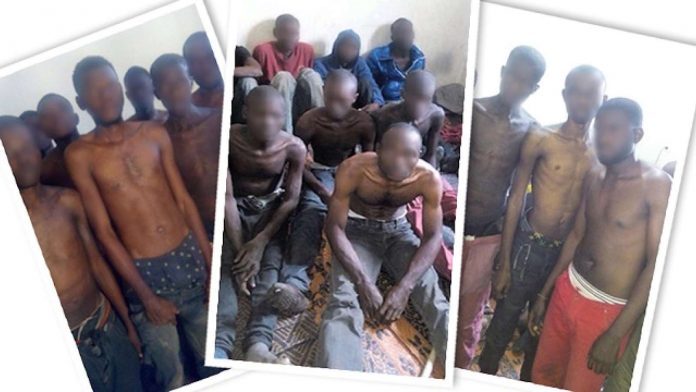 Share this on WhatsApp
Some citizens have begun to mount pressure on President Muhammadu Buhari to make arrangements for the evacuation of Nigerian citizens who are becoming victims of neo-slave trade in several parts of Europe and North Africa, particularly, Italy and Libya.
Comrade Abdul Oroh, joined the league of advocates for evacuation of Nigerian citizens from Europe and North Africa. He demanded that the “federal government should set up a special task force headed by the Nigeria Navy to evacuate ‘Nigerian slaves, potential slaves,’ migrants and all victims of human trafficking from Italy and North Africa.” He maintained that “this matter is of urgent national importance;” appealing: “Alhaja Aisha Buhari please persuade your husband, our president, to please act now.”
Celebrities like Chris Brown, Snoop Dogg, and Tuface Idibia have spoken up on the inhuman treatment of Nigerians in Libya. They demanded the federal government to send aids and protect Nigerians in Libya and in the diaspora as well.
Recent report has it that Nigerians encounter hazardous risks absconding from the country in search of greener pastures overseas.it was indicated that thousands of Africans, including Nigerians, struggle to cross the Mediterranean Sea into Europe. It was gathered that currently, Nigerians are amongst the migrants captured on the Mediterranean Sea being sold into slavery.
ALSO SEE: More African migrants perish off Libyan coast
Between 25 and 50 million people were said to have become victims of human trafficking, crossing borders from Asia, Africa into Europe. Many after months of trekking across the desert to the continental boundary of North Africa, embarked on deeper journey into the unknown, risking their lives to migrate into Europe through the Mediterranean Sea which has become death trap for many migrants. Some survival who were lucky in rescue operations by European security operatives subsequently become victims of slave trade.
It was gathered that in North Africa, Libya now has a big market for slave trade. Libya now generate internal revenue through human trading of thousands of people who are desperate to arrive Libya’s coast en route Europe through the Mediterranean Sea into Italy, Spain, etc.
Libya has been the gateway for people attempting to reach Europe by sea, with over 150,000 people struggling daily to cross the sea border in the past three years.
The refugees are usually from several African countries and they say they have fled war, poverty, and unemployment in their countries. It is sad that Nigerians are caught in this web as well.
Recently, 26 Nigerian women were identified to have on their way to cross the Mediterranean Sea. Many Nigerian citizens are sexually abused by citizens of their host countries, while others are sold into slavery. It was gathered that a Nigerian slave is sold at the cost of N145,000.
Share this on WhatsApp