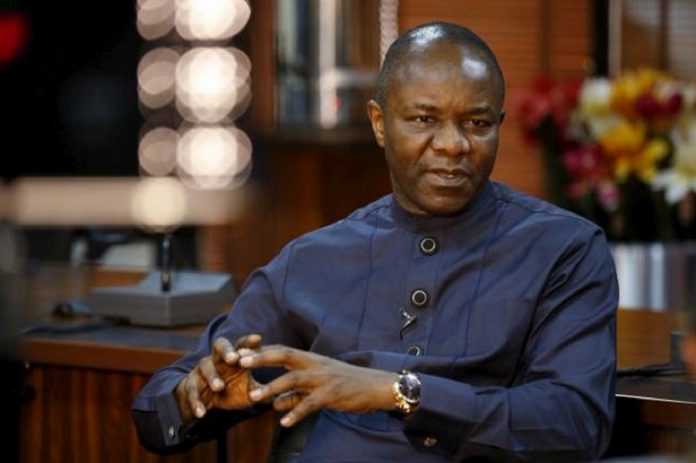 The Minister of State for Petroleum Resources, Dr. Ibe Kachikwu, has disclosed that the federal government is set to disburse the first tranche of the $5.1 billion Joint Venture (JV) cash calls debt it owes international oil companies (IOCs) operating in the country.

Recall that the federal government had last December negotiated terms with the IOCs to formally exit the JV cash call obligations it owes Shell, Chevron, Total, ExxonMobil and Nigeria Agip Oil Company (NAOC). It got a discount of $1.7 billion from the companies and agreed to pay the balance of $5.1 billion over a five-year period.

Kachikwu said recently during the opening session of the maiden Nigeria Oil and Gas Opportunity Fair (NOGOF) in Uyo, the capital of Akwa Ibom State, that the government was in the final stages of making the first payment by April.

The NOGOF was initiated and organised by the Nigerian Content Development and Monitoring Board (NCDMB) to showcase opportunities for advancing local content application in the country’s oil industry.

Kachikwu equally explained that as part of the government’s four-year economic recovery plan during which the country hopes to grow its crude oil production to 2.5 million barrels per day (mbpd), the government also wants the IOCs and other operators to extend their investment commitments to other aspects of the country’s oil and gas sector.

He said the government would expect the oil majors to go beyond exploration and production activities, to refining in the country. “Unless you find the funding, everything we say is entertainment, and so we must begin to focus very seriously as a nation on dealing with the financial challenges of the sector, not just for the big players but indeed more importantly the small players.

“So, we have taken the very first steps in the ‘7 Big Wins’ launched by the president to look at how to exit the cash calls. “We had reached an agreement with the majors in December.

We are trying to finalise the first stage of the payment in April,” Kachikwu said in his comments on the challenges facing Nigeria’s oil industry. Speaking on capacity in the oil and gas sector as well as the opportunities, the minister said: “We have the capacity to grow oil production in this country in excess of three million barrels per day, so when we sit crying about the difficulties, I think we need to focus on the opportunities that are there with the resources that we have been given to find solutions to the problems that we see.”