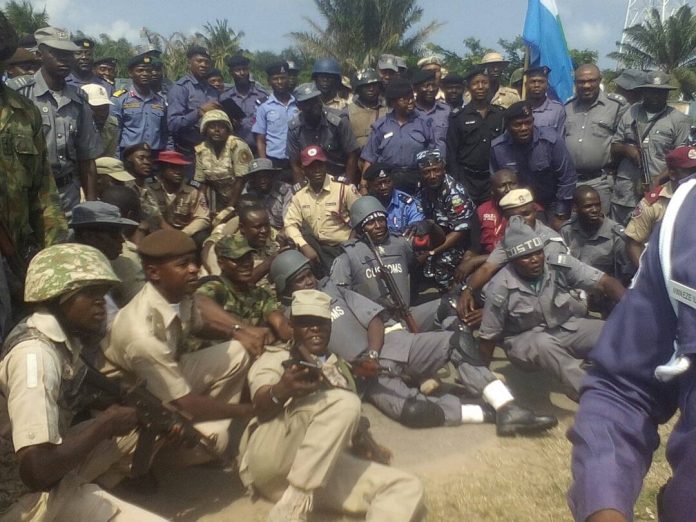 Share this on WhatsApp
Spread the love
By OKOSUN DENNIS
The Nigerian Navy on Saturday assured Lagos residents of its commitment to secure the country’s territorial waters as well as protects lives and property of the citizenry.
The Commanding Officer, Forward Operating Base, Capt. Olushina Ojebode said this after a 7km route march by the Navy and other security agencies held in the border town of Badagry, Lagos State.
Other security agencies that participated in the route march include the Nigerian Air Force, Nigerian Army, the Nigeria Police and the National Drug Law Enforcement Agency.
Capt. Olushina Ojebode reiterated that “The essence of today’s exercise is to enhance operational capabilities of our personnel and those of our sister agencies.
“I believe we will be able to perform our constitutional mandates better. Also, one of the reasons for this exercise is to assure the populace that they are safe and secure before, during and after the upcoming local government election,” Ojebode said.
According to him, the exercise was also to strengthen existing cordial relationship between all the security agencies.
He noted that the idea was to engender cooperation among the security agency in the discharge of their responsibilities to enable everyone work together effectively.
“We want to let everyone know we are always ready and so, if need be to support other sister agencies in the election, then we will.’’ 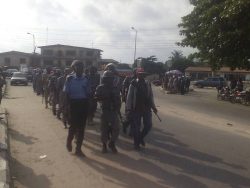 Ojebode, however, warned anyone or group who may wish to disrupt the elections to have a rethink as adequate security arrangements had been made to prevent breakdown of law and order.
National Daily learnt that over 300 personnel from different security agencies participated in the route march that started as early as 8:00 a.m.
The route march saw officers and men of the different security agencies march from the navy base at Topo to Badagry and back to the base.
Share this on WhatsApp