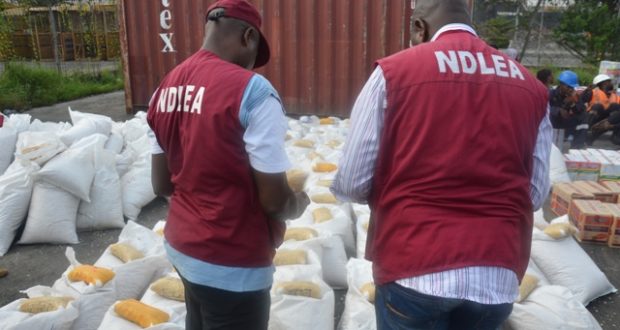 Share this on WhatsApp
Spread the love
The Edo State command of the National Drug Law Enforcement Agency (NDLEA) has smashed a powerful cartel that specialized in inter-State cannabis smuggling.
It was learnt that a truck belonging to the cartel was conveying cannabis neatly concealed in a consignment of processed wood from sawmill was intercepted along Lagos-Benin Bye-pass.

According to the State Commander, Wakawa Buba, a total 332 bags of dried weeds that tested positive for cannabis weighing 5,146kg was found in the truck.
National Daily gathered that the estimated street value of the seized drug was N51.4 million.
Among those arrested include the driver, Ossai Frank, 35, and two workers, Azuka Ossai, 29, and Emenike Uba, 25, all from Delta State.
According to the Principal Staff Officer Public Affairs, Edo State Command, Ofoyeju Mitchell said the suspects have confessed to the crime adding that the quest for survival made them go into the criminal act.
However, it was learnt that the interim investigation by the agency revealed that the truck originated from Owo in Ondo State and was heading towards Abi in Delta State before they were nabbed.
Ossai Frank who is said to be married to two wives and a father of four children said that this is not his first time of conveying cannabis.
ALSO SEE: Police kill 5 Kidnappers in Ikom, rescue victim
In his words, “I used to carry rice and biscuits but whenever there is cannabis, I also carry so as to get some money to take care of my family. I was pushed into cannabis business due to financial hardship. This is not my first time”.
Wakawa expressed delight over the crackdown stating that it was based on intelligence report and diligent surveillance by his officers that led to the arrest.
“This is a very successful operation. It was based on intelligence report and diligent surveillance. We have been monitoring them for some time and I am glad that our sacrifices have been handsomely rewarded. The command is prepared to counter the illegal activities of drug barons” he stated.
He also added that efforts are on-going to arrest and prosecute other members of the cartel in accordance with the NDLEA Act. Meanwhile, the three suspects will soon be charged to court.
Share this on WhatsApp
Related Topics:CannabisEdo StateNational Drug Law Enforcement Agency (NDLEA)
Up Next

Millions of company’s money invested in MMM; suspect stands his ground in court