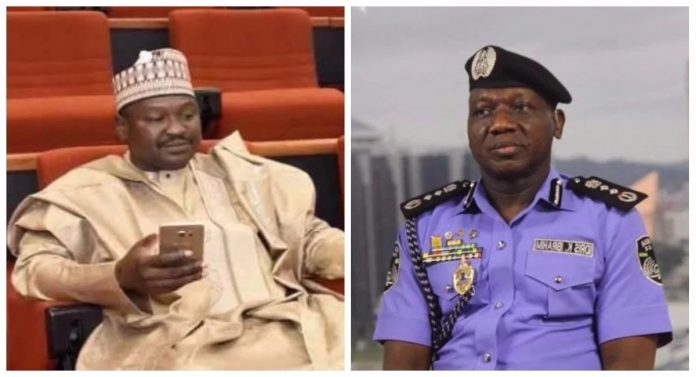 Share this on WhatsApp
Spread the love
Sen. Isa Misau has ripped into Inspector-General of Police Ibrahim Idris again, asking the Senate to look into allegations of abuse of office he levelled at the police boss.
According to the senator, the IG is openly having two relationships with policewomen who he gave special promotions.
“One of them is Amina and one of them is DSP Esther which the IG on 15th of last month got married to that woman DSP. Under police act and regulation, you cannot marry a serving woman police unless that woman retires. He quickly did a secret wedding in Kaduna because the lady is four months pregnant,” he said on the floor Wednesday.
The former police officer turned politican claimed he was taking on the IGP because of the institution.
But the senator and the IGP have been trading accusation for a while now. Misau said the police boss os corrupt, and has been minsmanaging the force resources. But the Force jeadquarters said the senator was a deserter, and was not qualified to in the Senate.
ALSO SEE: Police promotion bribery scandal is true – Police source
Misau was, however, cleared by the Police Service Commission.
Explaining the effect of Idris’ bad administration, Misau said there are serving police officers who are now demoralized because of the activities of the office of the IGP.
“Mr. President, even when it comes to appointment, the IG decided to have his own boys who are just assistant commissioner of police.
“He will give them deputy commissioner of police, they won’t spend three months or six months he will just give them acting commissioners of police,” he added.
He also alleged that the IGP is using his office to undermine the power and function of other high ranking officers, siting the mobile police unit posting now carried out in his office, when there os a commissioner for that.
“Under the police act and regulations, every investigations into the force is supposed to be done under the office of the DIG Investigations and Intelligence but now, the IGP has created so many units under him putting junior police officers as heads thereby undermining the statutory office of the DIGs,” Misau said.
Financially, the senator also dished some dirt on the Idris.According to him, there is illegal diversion of funds by the IGP.
“Under the 2016 appropriation act, there is the provision where the IGP is supposed to purchase armoured carriers. Instead of purchasing the 8 armoured patrol carriers to help the President in fighting insurgency in the North East, he diverted the fund to something else,” he said,
The Senate has therefore set up an eight-member ad-hoc committee to investigate the allegations.
The Committee on Ethics, Privileges and Public Petitions to investigate police allegations against Mr. Misau, and present its findings to the Senate will also investigate the Force allegations against the senator.
Share this on WhatsApp