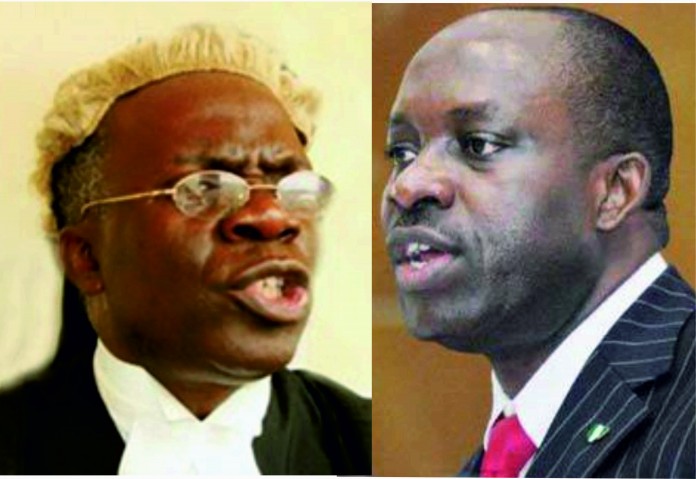 Senior Advocate of Nigeria, Femi Falana has described as joke yesterday’s call from a former Governor of the Central Bank, Chukwuma Soludo asking the lawyer to apologise over allegation that the former CBN Governor diverted $7 billion from Nigeria’s foreign reserve to some commercial banks in 2006.

“…he asked for a retraction of the allegation and apology from me. Although Professor Soludo’s rejoinder was full of vitriolic attack and unwarranted  innuendoes, I decided not to react to them since he claims to have respect for me!

“However, in rejecting  his  baseless demand for apology and retraction I had pointed out that it was the CBN management that issued a statement on October 3, 2006 to the effect  that its share of  $7 billion had been released  to the 14 banks. While confirming that the CBN management actually issued the statement, Professor Soludo has turned round to say that it was a deposit and not a loan. So the $7 billion transaction is no longer a lie emanating from me!”

“But in a display of empty arrogance, the former CBN governor proceeded to accuse me of exhibiting ignorance by referring to the deposit placed in the 14  banks as a loan. In his tirade Professor Soludo never disclosed  the terms of the “deposit” of the sum of $7 billion and  when the principal sum and the accrued interests were  paid back to the nation’s foreign reserves.”

“For the avoidance of doubt,  I  wish to reiterate that it was the management of  the CBN which claimed to have given out  its own “share”of $7 billion from  the foreign reserves estimated at $38 billion at the material time.  Is Professor Soludo insisting that  CBN under his management was entitled to  any “share” of the nation’s foreign reserves? In any case, whether it was a deposit or its own “share” of the foreign reserves did the CBN ever announce that the deposit had been paid back to the foreign reserves which belong to the three tiers of Government of Nigeria? If there is  nothing to hide why did the CBN ignore the request of the Civil Society Network Against Corruption   for information on the “deposit” of $7 billion?”

“In my petition to the efcc i had equally  alleged that the CBN also gave a bailout of N600 billion to the banks in 2008, made available  intervention funds of trillions of Naira  to the captains of industry and paid N2.5 trillion for fuel subsidy in 2011 when the  national assembly had appropriated the sum of  N245 billion. As far as Professor Soludo is concerned, these allegations are “laughable and betray a lack of knowledge of how a bank such as CBN works.” Since the allegations of gross mismanagement of public funds are

“laughable” are we to believe that  these were “deposits” as well? Or the “share” of the CBN mismanagement under his predecessor?”

“Has AMCON not been set up to recover those  loans and deposits running to several trillions of Naira? For goodness sake, how does a CBN work outside the ambit of the Constitution and the Central Bank Act, 2007?”

Frankly speaking, I  am of the strong view that the   demand for an apology by Professor Soludo is a joke since  it was the CBN management under him  that claimed to have given its own “share” of  $7 to the 14 banks, Falana retorted.
“Certainly, mine is not like the case of a banker who once alleged  that the sum of N30 trillion was missing from the Federation Account without any scintilla of evidence to back it up.”