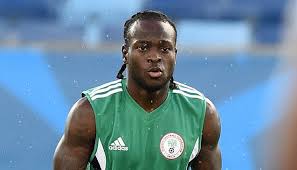 Victor Moses .He is 27 years old. Under normal circumstances no player voluntarily retires from international football at an age that he is at his very best – experienced, mature, exposed, comfortable and at the peak of his physical fitness. So, to retire at 27 means something is not right somewhere.

This is the case of Victor Moses. It may take a psychoanalysis of his situation to understand his motivation for announcing his retirement from the national team this week. In the line of hierarchical succession Victor Moses should naturally become the Super Eagles’ next captain and the heart of a new assembly of players that shall emerge from the debris of the 2018 World Cup campaign.

So, with his premature retirement some things do not add up.For the first time since he started representing Nigeria many years ago I saw him from close up in Russia during the last World Cup.I actually shared a sentence or two with him, and took a picture with him for the first time in a relationship that did not exist between us for all the years he has represented the country.

I assumed he was either shy and reserved, or insecure for some reasons. A player with his prodigious talent and fame should not be insecure at all.  His profile and achievements should naturally neutralize any insecurities, except, of course, if they are really much deeper than is assumed. The few people that have interacted more with him in the team than I have tell me he is definitely not a shy person. That, indeed, sometimes he even tended to arrogance and not timidity. That speaks volumes.

His pre-mature retirement, therefore, attracts careful scrutiny so that the country does not lose the services of a great son, a needed asset and a true football hero without understanding why. Victor Moses has always been on the quiet side, hardly speaking to the press, hardly seen in public places outside the field of play, especially in Nigeria.

Whenever he comes to Nigeria he stays away from the limelight of the media. He never stays in the country for long, breezing in at the last minute before matches and heading out with the earliest flight available. I have never read about him travelling in the country for visitations during any of his trips to play for the country. He never came for vacations. In short, his physical links to Nigeria are very slim outside of football. He never looked comfortable outside of the football field whilst here in Nigeria. He was more like a mercenary hired to come and play without any links to the country.

Probably, and understandably, that may be because he did not play domestic football in Nigeria before he became fostered in the United Kingdom. Probably, also, it might be the result of the reported traumatic circumstances under which he left Nigeria as a young orphan. But even that is shrouded.

The popular story about how his parents were killed during political riots in Kaduna and how he was ‘smuggled’ out of the country by a good Samaritan inspired the production of a movie by some foreign producers (in collaboration with me) who wanted to tell the story of Nigerian football through the experiences of a young Victor Moses and his grass-to-grace odyssey in football.

The production was halted when doubts arose about the authenticity of some of the facts. It would have been catastrophic to produce a movie based on a true-life story not in congruence with verifiable fact.
His allegiance to Nigeria was always reflected by the level of his commitment to the national team. To most analysts he was a reluctant player even when the national team offered him the best opportunity to market himself globally at a time he was dangling between teams in Europe. For some reason, Victor Moses always carefully selected his appearances for the national team. He also avoided interviews about his personal life like a plague, feeling more comfortable playing, living and identifying with his foreign clubs in Europe.

Now, fate has brought him closest to Nigeria. He is in the hierarchical line to become the next captain that a new Super Eagles assembly needs.In Russia, he did not fully deliver. Following that ‘failure’, the challenge of restoring Nigeria to its place as a great football force would again depend to some extent on the role that Moses takes on and plays going forward.

That role will place him front and centre of Nigerians and Nigerian football, that will entail identifying with home more often, and demonstrating a higher level of commitment and patriotism. Victor Moses appears on the surface not to be cut out for such of a role. I do not think also that he can do it, yet the country needs him.
Should he remain in the team and the responsibility of captain be handed to a younger player how would that impact on Victor’s psyche?I can see his psychological dilemma. He must have thought through all of this also and chosen to retire from the team and enjoy his private life in European club football.Moses loves football. He also loves to win. He seems to want to avoid the scrutiny of his life that the responsibility of leading the Super Eagles and being the team’s face and the country’s ambassador would bring.

Barring any injuries, Victor Moses may still have a good 3 to 5 years of football left to give to the game and the country. He can be with the Eagles until the next World Cup in Qatar.Moses may be afraid of the enormity of the weight of responsibility he has to carry should he be its captain. So, two things can happen now.Victor Moses must have thought through the present circumstances and chosen the easiest and lest complicated way out – retire, continue his football at club level only, and forget about playing for the national team again.
Otherwise, a crop of young very exceptional players will emerge that may motivate Moses to reconsider and return to the team but only after a new captain must have been appointed.That way he can come back and resume his simple, unattached and unobtrusive role in the team without the burden of leading the team. Finally, I believe that this retirement is temporary, all things considered. We shall soon see him again in a new Super Eagles assembly that will take the country to Qatar 2022. The big deal will be that Victor Moses will not be its captain!