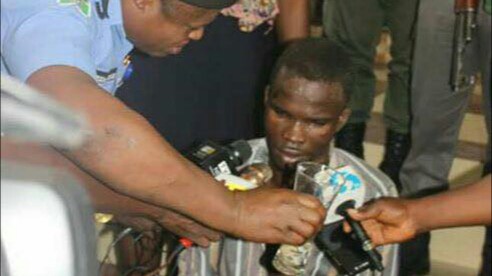 Share this on WhatsApp
Spread the love
The police in Rivers State have arrested a man for allegedly killing an eight-year-old girl in the state for ritual purpose.
The police spokesperson in the state, Omoni Nnamdi, said in a statement issued on Saturday that Ifeanyi Dike, 23, allegedly abducted the little girl, Chikamso Victory, on Friday.
The suspect was said to have raped and wilfully killed the girl, before cutting off her vagina, eyes, tongue, and breast which he put in a polythene bag.
Nnamdi, a deputy superintendent of police, said the suspect was arrested by a local vigilante while he was on his way to dispose of the body.
ALSO SEE: Eight kidnap suspects remanded in prison till Oct. 30
The police spokesperson said the vigilante members became curious when they noticed Mr. Dike’s suspicious movement.
He was said to have dropped off the bag containing the body and ran away when the vigilante members began questioning him.
“He was given a hot chase and (was) arrested,” Mr. Nnamdi said.
“On further interrogation by the police, he confessed and took the police to where the vital organs were concealed,” he said.
The police said they have recovered the body and organs and that the suspect was helping in investigation.
Share this on WhatsApp