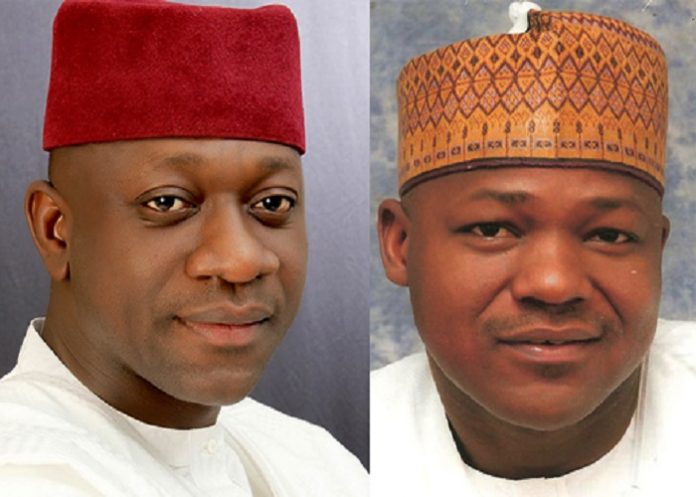 Share this on WhatsApp
Spread the love
The embattled member of the House of Representatives, Abdulmumin Jibrin, has expressed doubt that the slips showing breakdown of salary the Speaker of the House of Representatives, Right Honourable Yakubu Dogara, declared reflect the true monthly earnings, National Daily reports. The House member currently in suspension following his outburst over budget padding and corruption in the Lower Chamber of the National Assembly in 2016, articulated that the declaration made by the Speaker indicated that he earns more while the Speaker is the Presiding Officer in the House.
According to Jibrin, “if the pay slips released by the Speaker, Yakubu Dogara, is anything to go by, then, I earn more than the nation’s number four citizen.”
The federal lawmaker disclosed that he has requested for his pay slips from the National Assembly and would publish it as soon as they are available to expose the true earnings of lawmakers in Abuja.
“If what I saw is the authentic pay slip of Mr. Speaker, it means I earn more than him from what I see in my salary statement of account.
“I have requested for my pay slip from National Assembly, I will publish it and my monthly salary statement of account. Perhaps I have been over paid,” Jibrin had declared.
He contended that the statement issued by the House of Representatives Media Aide in response to Governor Nasir El-Rufai’s challenge to the National Assembly leadership failed to address the call by Nigerians and majority of members for the Speaker to disclose details of the internal budget of the Lower Chamber.
He insisted that the leadership of the House should not think it is doing the public a favour by disclosing details of the budget.
ALSO SEE: APC peace deal collapses as presidency dares Senate on Magu
Jibrin had declared in his tweets: “Beside salaries, allowances and running cost, no member has details of about 20 other expenditure heads captured in Namdas statement.
“I am aware majority of members feel terribly embarrassed and are presently insisting on having access to the internal budget of the House.
“The details of INEC budget does not just ‘exist elsewhere’. The NASS scrutinizes and approve details of INEC budget every year.
“Mr Speaker, you know that NILS HQ is not completely funded from National Assembly allocation but part funded by Federal Government under service wide vote.”
Governor Nasir El-Rufai of Kaduna State had published the breakdown of his security budget, among other items, thereafter, the Governor challenged principal officers of the National Assembly to show transparency in their use of public funds and public details of their internal accounts. This compelled the Speaker of the House to publish his pay slips 24 hours after.
Share this on WhatsApp