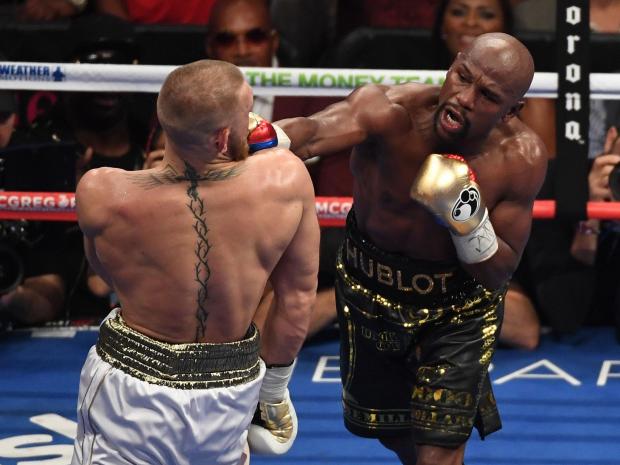 With the victory, Mayweather surpasses Rocky Marciano, who retired in 1956 with a 49-0 record.

McGregor more than held his own in what was his first professional boxing fight, but the gulf between him and Mayweather grew the longer the fight went on.

After the bout reached the halfway point, McGregor began looking visibly fatigued and Mayweather sensed an opening. He showed a level of aggression rarely seen in his previous 49 victories. According to Stats, Mayweather had landed 132 punches compared to 80 for McGregor entering the 10th round.

In the 10th round, Mayweather really went on the offensive, and McGregor had no answer for the barrage. After Mayweather landed a series of blows without reply from McGregor, referee Robert Byrd called for the bell.

Mayweather also appeared to shut the door on stepping in the ring again, saying this was his last fight, per BBC Sport.

 ALSO SEE: Eye-watering money Mayweather will earn from the fight of the year

Many expected Mayweather to beat McGregor, with the biggest question being whether the fight would last the full 12 rounds. Mayweather’s last knockout was against Victor Ortiz in 2011.

Although McGregor is UFC’s lightweight champion, he was clearly overmatched against somebody who’s one of the best defensive boxers in history. The likes of Manny Pacquiao, Canelo Alvarez, Miguel Cotto and Oscar De La Hoya have all tried to take down Mayweather and failed. McGregor stood little chance in what was his boxing debut.

Saturday’s fight wasn’t about putting on a competitive matchup in the ring. Instead, it offered Mayweather what’s likely to be one more massive payday and granted McGregor the opportunity to earn more from one night than he had over the entirety of his UFC career to date.

ESPN.com’s Darren Rovell projected in June Mayweather vs. McGregor could gross a little over $606 million. The two fighters signed a confidentiality agreement, so their full earnings are unlikely to ever be revealed, but ESPN.com’s Dan Rafael reported Mayweather will take home a purse of at least $100 million, while McGregor will make a minimum of $30 million.

From an aesthetic perspective, Mayweather’s victory over Pacquiao in May 2015 was disappointing, but it was a massive financial success for the pair of stars.

Rovell and Rafael reported Mayweather took home between $220 million and $230 million, while Pacquiao earned $150 million, which was to be divided among he and Top Rank founder Bob Arum.

As long as Saturday’s pay-per-view meets its revenue expectations, it’s doubtful either Mayweather or McGregor will walk away regretting his involvement.

If anything, the two may consider a rematch.

Share this on WhatsApp
Related Topics:BoxingConor McGregorFloyd Mayweather Jr.
Up Next