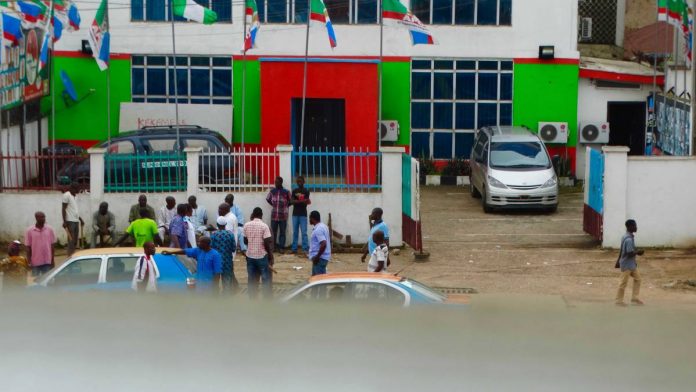 Chieftains of the ruling All Progressives Congress are not relenting in positioning themselves for the exalted office of the national chairman ahead of the party’s national convention.

Meanwhile, the ruling party’s Caretaker/ Extraordinary Convention Planning Committee (CECPC) is yet to make a formal pronouncement on the date of the national convention to elect the party’s national officers

While inaugurating appeal committees for the recently conducted ward congresses, the National Secretary of the party, Senator John James Akpanudoedehe, said the outcome of the report and recommendations of the appeal committees would decide when the local, state and zonal congresses would be conducted.

National Daily gathered that former governors and former senators aspiring to the office of the National Chairman are predominantly from the North Central and North East zones.

Also in the race are a former chieftain of the defunct Congress for Progressive Change (CPC) from Kwara State, Mustapha Salihu and Sunny Moniedafe from Adamawa State.

Further investigation revealed that the senator representing Niger East, Sani Musa, has since joined the race for the position of the national chairman.

Sources at the party’s national secretariat disclosed that the Niger State governor, Abubakar Sani Bello’s push for the office of the National Chairman be zoned to the North Central has created a cold war between him and his counterpart in Kogi State, Yahaya Bello.

“Governor Yahaya Bello doesn’t want the office of the National Chairman zoned to North Central. He believes that such an arrangement would foreclose his presidential ambition. That is in conflict with the interest of Governor Sani Bello who wants the position for the North Central,” the source said.

The party’s leadership has equally been silent on the zoning arrangement that would decide the geo-political zones that would produce the National Chairman, National Secretary, Organising Secretary, among other strategic officers.

Party chieftains with eyes on the presidential ticket are, however, not leaving anything to chance, knowing that a new set of national officers would conduct the national convention where the party’s presidential candidate for the 2023 general elections would emerge.

A senior member of the CECPC, however, said that the national leader of the party, President Muhammadu Buhari, would decide the zoning arrangement.

He said: “The decision on the zones to produce the national officers is beyond the caretaker committee. If any of us tells you anything contrary, he is deceiving you. When the time comes, President Buhari will sit down with some of the stakeholders and they will take a position.

“That is beyond the mandate of Governor Mai Mala Buni and the rest of us in the caretaker committee.”