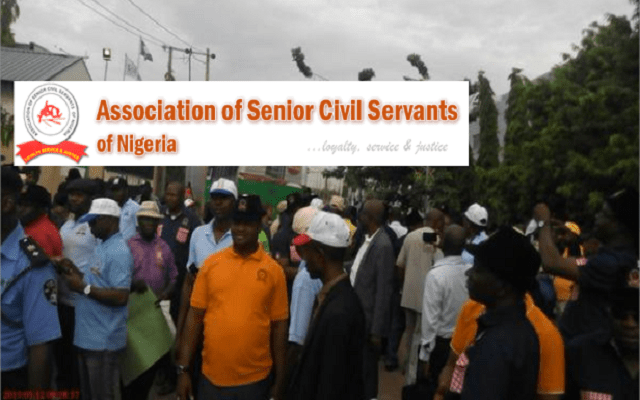 The Association of Senior Civil Servants of Nigeria (ASCSN) Congress has condemns in the strongest terms, the convocation of a National Executive Council (NEC) by the Secretary General, Alade Bashir Lawal on Monday 16th August, 2021 at the Airport hotel Ikeja, Lagos, Nigeria.

In a statement signed by Comrade Andrew Emelieze, Converner of ASCSN Congress and National Coordinator of All Workers Convergence (AWC), the Congress regrets that a senior staff union would descend so low to float a court order restraining the convocation of such a meeting.

Emelieze, a former Chairman ASCSN Oyo state, said the body is surprised at the disregard of court orders by a citizen in a country ruled according to laws.

“However, let it be known that the ASCSN Congress has resolved that all decisions reached at the NEC meetings do not hold water. They are not accepted and approved by the Congress; they are illegitimate, null and void.

“All that was done in Ikeja was the malevolent plot of the Secretary General , in order to elongate his employment beyond sixty five years and also impose a stooge President he will be able to manipulate so that he can continue to manipulate and exploit the union as he has been doing.

“It is equally sad that so called Comrades were in that unholy meeting which was brought forward from 10am to 7am for fear of the Congress protesting; and not even a single Comrade is able to raise a discerning voice.

“The Congress still maintained our stand that we all follow due process and wait for court verdict on the determination of the order restraining the union from some activities.

“We therefore call on the Federal Ministry of Labour and the Head of Service of the Federation, Dr. Folashade Yemi-Esan not to have any dealings on our behalf with ASCSN until the court decides otherwise. The National Assembly house committee on Labour should also take note of this development.

The group also called for the reinstatement of the over twenty sacked staff of ASCSN in the month of June 2021 by Alade Bashir Lawal, and rejected the years of service extension to Alade Bashir Lawal, whom the NEC wants to remain in office up to sixty seven years and thereafter, be employed on contract basis.