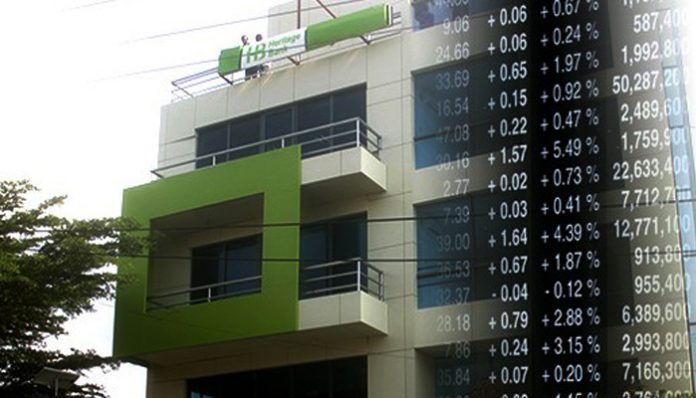 This is certainly not the best of times for Mr Ifie Sekibo-led Management Team and indeed the Board of Heritage Bank Plc. Reason: The Economic and Financial Crimes Commission (EFCC) on Tuesday moved an application at a Federal High Court in Lagos seeking the final forfeiture of the sums of N1.260bn, $327,132, £165.85 and €157.90 discovered in several accounts in the Bank which are reasonably believed to be proceeds of fraud.

This development has thrown the bank into serious panic since the details were exclusively obtained by The National Daily, and given the depth of the investigation which is under the direct supervision of the Acting Chairman of the Commission Mallam Ibrahim Magu.

The application, National Daily gathered, was supported with an affidavit, 16 exhibits and a written address.

In the affidavit deposed by Peter Chimdinma, an Investigative Officer with the EFCC, the funds were generated through insider dealings, misrepresentations and falsification of documents by some highly placed staff of Heritage Bank Plc.

Chimdinma said he was assigned to investigate the Intelligence Report bothering on conspiracy, stealing, obtaining money under false and money laundering involving some bank accounts in Heritage Bank Plc.

He stated that staff of Heritage Bank connived and moved the sum of N85, 000,000 from the heritage bank account of Impetus Trust Ltd into the Heritage Bank account of S *& S Hotels and Suites Limited under the false pretence that it was a transfer authorized and carried out by another customer of the bank Impetus Trust Ltd for agricultural product procurement related transaction.

“There was no agricultural procurement contract in existence involving Impetus Trust Ltd and no person in the Bank could give legitimate account of the source of the money and why the same was transferred to Impetus trust Ltd.”

National Daily further gathered that sometime in June 2017, Multichoice Nigeria agreed to purchase $2,500,000 from Heritage bank at the rate of N370 per Dollar.

He said Heritage Bank Plc made the transaction at N307/$, and in other to conceal part of the amount realized from regulatory authorities, a staff of the bank diverted the N157.5bn to the account of Twins  Clearing  Services, and purported the later to be entitled to the money.

However, when contacted, Taiwo Abiodun Saheed, who is the sole signatory to the account of Twins Clearing Services denied or authorizing the payment.

Chimdinma stated that Heritage Bank did not provide any legitimate explanation for the transaction and consequently returned the said money through 16 separate bank drafts issued in favour of EFCC recovered funds account.

Also in the affidavit, Chimdinma said the sum of $327,132.35 was recovered from the balances in the dollar accounts of Hiltrans Global Investment Ltd with account number 21100000477 and Peacemaker Consulting Ltd No 2100000446 in Heritage Bank Plc.

He also stated that between February 2015 and February 2017, officials of Heritage Bank Plc namely Ifiesimma Sekibo Melvin, Kolapo Kola Daisi and Funmilayo Taiwo and others at large connived and caused a total sum of N1bn to withdrawn from the bank through the account of Vlamings Professional Ltd by falsely representing that the said money was proceeds of investment of Vlamings professional Ltd with the Bank.

He said from investigation, Vlamings neither had any such investment nor loan in the bank nor ever authorized any such transaction.

Sources close to the ongoing investigations disclosed to National Daily that the Central Bank of Nigeria is watching the investigations closely and has in fact, commenced internal investigations to determine how these details being revealed went unchecked.

“Certainly, there will be sanctions, and even the actors in the matter know the rules,” our source said.