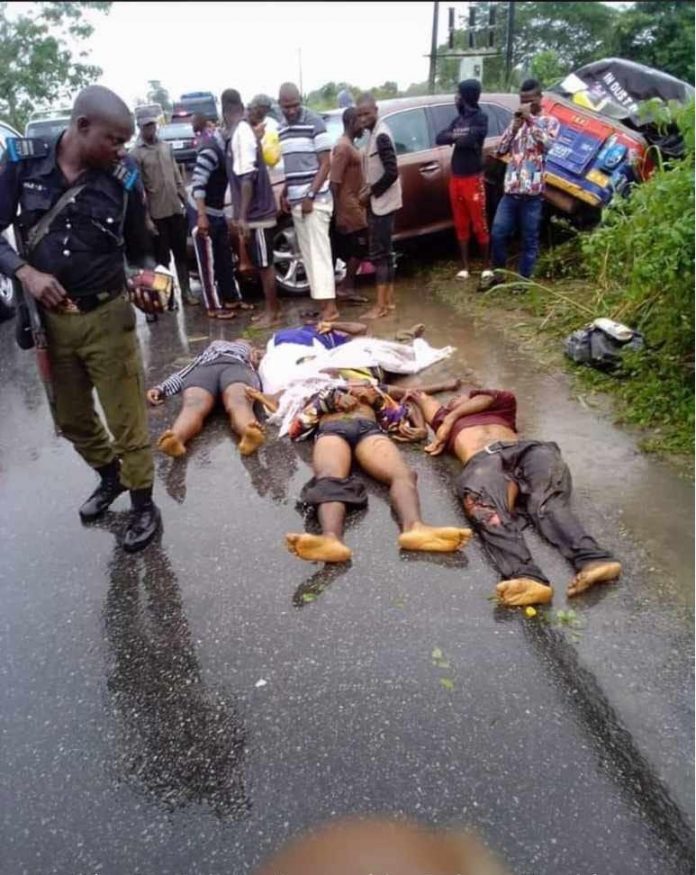 Updating the public on the road traffic crash that claimed five along Tombia-Amasomma road in Bayelsa, the state police command has released the identities of the dead victims, the killer driver, and the state of investigation.

But the driver is still on the run.

The Spokesman for the Bayelsa Command, SP Asinim Butswat, in a statement on Friday , said, “The fatal motor accident occurred on 19 August 2021, at about 1640 hours along Tombia -Amassoma Road, involving a Toyota Venza with Reg N0. KMK 617 BY, and two tricycles with Reg No. NSK 073 QH and LND 223 QH.

“Five corpses were evacuated from the scene and four of them have been identified as, Okon Daniel ‘m’ 47 years, Oweinkuro Profit ‘m’ 52 years, Mrs Domoye Ikpaipai ‘f’ 73 years and Bathurst Augusta Nyoun residing at bossy water along Amassoma road.

“Sketch marks of the scene has been taken and investigation is ongoing.

Based on an initial eyewitness account, the driver of the Venza lost control as a result of the downpour and rammed into two oncoming tricycles, killing five passengers, and injuring others.

The Federal Road Safety Corps (FRSC) had evacuated the corpses and deposited them at a mortuary in Yenagoa, while the injured persons were taken to hospital for treatment.

No official statement from the corps yet.