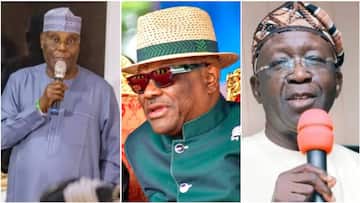 Governor Nyesom Wike of Rivers State on Friday urged the presidential candidate of the Peoples Democratic Party (PDP), Atiku Abubakar, to resolve the lingering crisis in the PDP on basis of political expediency not law to enable the party move forward in its bid to win the 2023 presidential and other elections in Nigeria. Governor Wike in the media interaction broadcasted live and monitored from Lagos by National Daily, stated that no party that wants to win elections is arrogant like the PDP. He challenged Atiku to prove to Nigerians that he has the capacity to unify the country by unifying the PDP.

Wike declared that the north has won the PDP presidential ticket and that the southern members have accepted their faith and that there is nothing anybody can do about that. He insisted that the PDP national chairman must, therefore, be returned to south before the commencement of campaigns.

“Prove that you have the capacity to unify Nigeria by first unifying the PDP. You have to resolve the PDP crisis based on political expediency that the party wants to win 2023 elections, not law. If the PDP and Atiku want Nigerians to believe their promise to unify the country, they must resolve the PDP crisis first.” Wike declared.