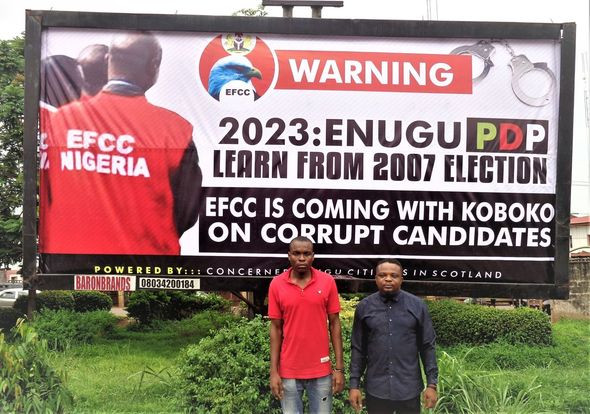 Operatives of the Enugu command of the EFCC have arrested an outdoor advertisement executive for using the commission in political ad campaigns.

Two Super 48 Sheet Billboards located at Otigba and Zik Avenue Junctions in Enugu were bearing what the commission described as  ”offensive messages using the name of the EFCC to threaten the aspiration of some politicians in the state in the build up to the 2023 general elections.”

One of the messages reads: 2023: Enugu PDP Learn From 2007 Election… EFCC IS COMING WITH KOBOKO ON CORRUPT CANDIDATES.

The ad executive, Baron Nnamdi, was arrested on Saturday.

He told the commission he was contracted by a media aide to a former deputy governor of the state with governorship ambition.

According to him, he was paid N160, 000 for the one week campaign and that the media aide to the former deputy governor supplied him with the messages, EFCC logo and pictures of operatives used for the advertisement.

The ads on the billboards have been pulled down.

The commission warned politicians to refrain from dragging the EFCC into the political fray.