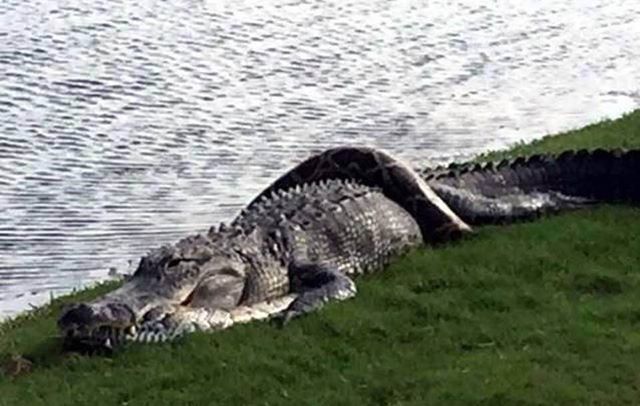 A Naples, Florida, golf course witnessed a deathly roll between an alligator and Burmese python last week.
The reptiliian match was caught on camera.
“The alligator seems to have the upper hand,” Dr. Richard Nadler wrote on Facebook. And state’s wildlife authorities like it that way.
“The python’s head was inside the mouth of the alligator and the alligator was just sitting there absolutely still with his eyes wide open,” Nadler told NBC affiliate WESH.
While state wildlife authorities couldn’t determine the outcome for sure from photos, they told Fox News they were “team alligator” in part because Burmese pythons are not from
Florida and their presence is harming the ecosystem.
ALSO SEE: Check out Trump’s award for fake news media
“We are encouraged by the prospect of a native Florida alligator consuming an invasive Burmese python,” said Brian Norris, spokesman for the Florida Fish and Wildlife Conservation Commission.
As for Nadler and his golf pals, the fight was some sight but it didn’t stop their day on the links at Fiddler’s Creek.
“We continued with our golf game,” he told.
PV: 0