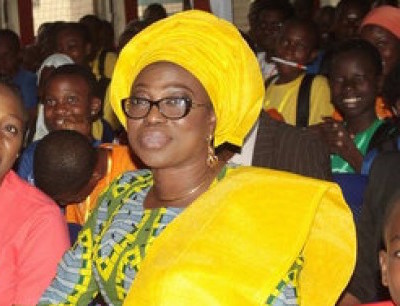 Share this on WhatsApp
Wife of Lagos State Governor, Mrs. Bolanle Ambode, on Wednesday urged pregnant women to complement the efforts of government at achieving zero infant maternal mortality rate by embracing healthy and hygienic lifestyle, just as she urged them to get proper advice and direction on basic ante and post natal care for themselves and their infants.
Mrs. Ambode, who spoke at a programme of support for pregnant women organized by Hope for Women In Nigeria Initiative (HOFOWEM), which is her pet project, said that often times infants are at risk of infections, diarrhea, poor growth and many common diseases associated with un-hygienic habits, and as such expectant mothers must make hygienic living a habit such as simple washing of hands constantly.
Speaking at the programme tagged “Hope for Expectant Mothers,” Mrs. Ambode said: “The act of washing hands is so simple yet we do not see it as a game changing solution. They are so elementary that we frequently forget they can save lives. Basic personal hygiene and good sanitary conduct begins with hand-washing.
“So it is an important message to take home for the young ones. Let them know the many benefits of that simple act. Tell them it prevents infections, keeps them neat, keeps them healthy and happy all the time.
“Even as mothers, always wash your own hands not only when you have visited the toilet but before cooking, serving food or attending to your infants. This way, many unnecessary illnesses for the child or mother would be prevented. As women, we have a key role to play in the health-for-all aspiration of the Lagos State Government. We must play our role effectively to help government achieve zero infant and maternal mortality rate,” the Wife of the Governor said.
Speaking on her passion for women and children, Mrs. Ambode said her vision was to transform their lives, put smiles on their faces, give them hope and make life more meaningful for them.
ALSO SEE: Ambode’s wife tasks civil servants on dedication to duty
“This event is significant for me as a mother, a parent and as a Nigerian. The programme is not just about supporting good hygiene and healthy habits during pregnancy and after delivery, but it is also about safeguarding the future of our children right from infancy,” she said.
She added that in the few years, the State had witnessed significant reduction in maternal and child mortality rate, attributing same to adequate ante and post natal care and the State Government’s continuous improvement on health facilities, constant re-training of medical personnel and provision of modern equipment including the regular supply of mosquito nets.
HOFOWEM is a foundation established with the intention of uplifting the welfare of widows, children and aged women.
At the event held at Adeyemi Bero Auditorium in Alausa, Ikeja, a total of about 230 pregnant women were given complete delivery packs which included baby and mother beds, sanitary pad, towel, beverages, thermometer, shawl, diapers, breastfeeding net, traveling bed, sanitizers, among others.
The beneficiaries, drawn from all parts of the State, were also lectured by experts on how to achieve safe delivery and other issues relating to healthy living.
Earlier, HOFOWEM Coordinator, Ms Oyefunke Adeleke thanked Mrs. Ambode for being a permanent fountain of kindness to women and children in the State, adding that the programme was one of the numerous initiatives aimed at significantly helping women and children.
Share this on WhatsApp