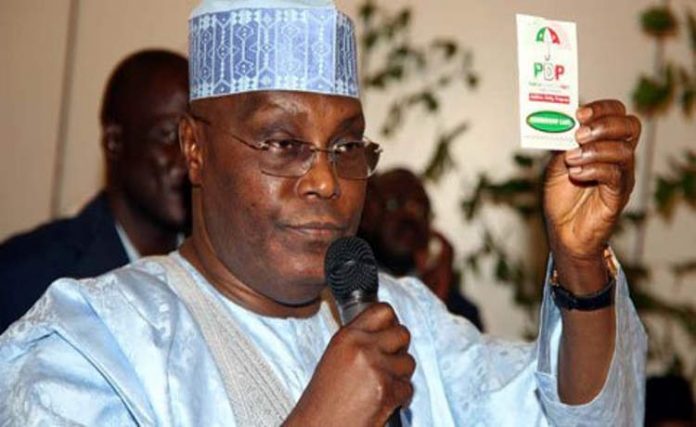 Atiku Abubakar, a presidential hopeful in 2019, has announced he is re-joining the Peoples’ Democratic Party, which he left about four years to join the ruling All Progressives Congress, APC.

The top politician who defected from the ruling All Progressives Congress (APC) less than two weeks made this known in a video posted on Facebook on Sunday afternoon.

Prior to saying he is returning to his former party, Atiku had said, “Some of you may know that I was elected vice president under the banner of the Peoples’ Democratic Party, which is a political party I have helped to found ten years before.

“Some of you may also know that I left the PDP four years ago when I believe it was no longer aligning to the principles of equity, democracy and social justice upon which we found it.

“I joined the APC as I hoped it would be new force that would help improve life for our people. I was excited about the party’s manifesto to create three million jobs a year. The result has not been the change promised or voted for.”

He harped on his being an entrepreneur and ability to create more jobs, taking personal credit for bringing to the country GSM telephony and attendant jobs provided. Atiku also seemed to have made the youth and job creation his selling point.

Atiku Abubakar served his two terms as vice-president under the platform of the PDP but left the party after ex-President Olusegun Obasanjo blocked his presidential bid.

He had contested the 2007 presidential election under the then Action Congress (AC), placing third after the late President Umaru Yar’Adua, who got PDP ticket and Muhammadu Buhari of the then All Nigeria Peoples Party (ANPP).