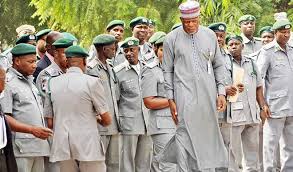 The Kaduna/Katsina Area Command of the Nigeria Customs Service (NCS) has generated N852 million as revenue for the month of August 2018.

The command’s Comptroller, Mr Oyeleke Abdulrazak, disclosed this in Katsina while addressing a news conference.
He said that the amount had surpassed the monthly target of N342 million given to the command.

Abdulrazak also said that the command had made 81 seizures with Duty Paid Value (DPV) of N32.7 million during the period under review.

Others are 327 jerry cans of vegetable oil, 28 vehicles, one truck and two motorcycles.

Abdulrazak attributed the successes recorded to the efforts of the intelligence unit of the command and cooperation qfrom other security agencies.

He urged the public to desist from smuggling activities, pointing ou that the command was ready to assist the public to go about with their legal businesses.