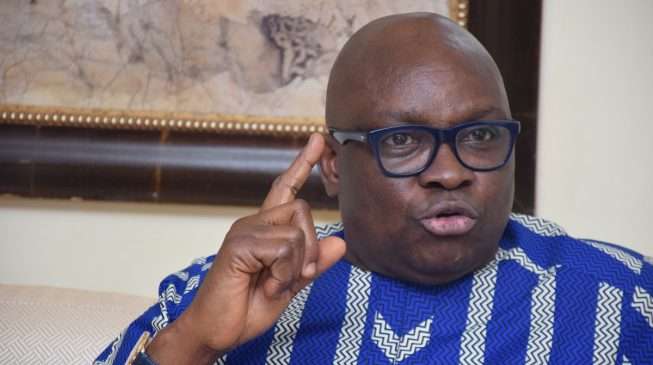 Share this on WhatsApp
Spread the love
The Political ambition of the younger brother of Ayodele Fayose, governor of Ekiti state, Olanipekun Oluwayose has split the family following the decision of the brother to decamp from the People’s Democratic Party (PDP) to the Action Democratic Party (ADP).
National Daily gathered that Olanipekun dumped the PDP because of his brother’s continuity agenda and his endorsement of his deputy, Prof Kolapo Olusola to succeed him.
Olanipekun said his brother has failed in governing the state, saying his endorsement of his deputy to succeed him was an attempt to prolong the suffering of Ekiti people and also hold them in perpetual servitude.
He said: “How can I ignore the pains that unpaid wages have brought on our people? If we want a better society, we must not let our relationship allow us to hold us back from standing by what is right.
“My decision to dump the PDP for the ADP is borne out my patriotism for an Ekiti that works for everyone. Ekiti is in shamble and we must embrace the right ideas that can take us out from the current economic and social doldrums.
“Let me make something clear here. I think today is the first time I’m meeting Adewale, but I have heard a lot about his capacity and resolve to turn a hopeless situation into an endless opportunity.
“We need someone of his standing to bring to bear his experience and discipline to the resuscitation of our social and economic values.”
Recall that Fayose had promised to stay away from the Peoples’Democratic Party (PDP) governorship primaries of Ekiti state slated for May 8, so as to avoid making other contestants uncomfortable or intimidated by his presence.
Fayose, who is supporting his deputy, Kolapo Olusola, said he doesn’t have to be present at the primaries for his preferred candidate to emerge winner.