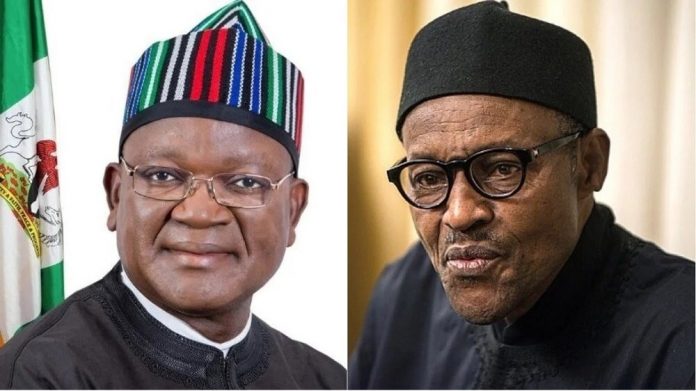 The Benue State Governor Samuel Ortom has warned that President Muhammadu may have plunged Nigeria into an avoidable crisis with his planned 368 grazing sites across 25 states in the country.

Ortom insisted that if President Muhammadu Buhari must actualize his cattle agenda in Benue State, he should be ready to kill all its inhabitants.

A statement by his chief press secretary Terver Akase futher opined that the State knows that grazing reserves and cattle routes are the only project that the President has for Nigeria, but Benue is not interested in such a project.

The Governor is reacting to a statement credited to the Presidency indicating that President Muhammadu Buhari has approved recommendations of a committee to review “with dispatch,” 368 grazing sites, across 25 states in the country, “to determine the levels of encroachment.”

He maintained that the Federal Government has no constitutional right to appropriate lands for itself or anyone else for that matter without the approval of State Governors.

“The Land Use Act has made Governors the custodians of all lands in their states. Nigeria is practicing democracy not despotism” he added.

Otherwise, what is the justification for President Buhari’s insistence that grazing reserves be established across the country when Nigerians have openly kicked against the policy and have embraced ranching in place of open grazing?

He said millions of Nigerians have been displaced following attacks by armed herders and are currently suffering in IDP camps.

“Benue State for instance has over 1.5 million displaced people with thousands living in camps and many more forced to flee their ancestral lands to stay under dehumanizing conditions in open fields.

“Farmers have been chased into IDP camps by herders and children are dying of starvation, yet what is more important to their President is the well-being of cows.

The Governor who expected the pitiable condition of the displaced people to be the preoccupation of the President whom they voted in 2015 and 2019 maintains that is unfortunate that the people’s love, trust and votes for Mr. President are being rewarded with hate, cruelty and dictatorial policies aimed at grabbing their lands to donate to herders and cows.

He challenged the Presidency to name what it has done to alleviate the plight of those displaced by herdsmen in Benue State since 2018.

“The country has been turned into a cow republic by the present administration,” Ortom added.

While noting that the President may not be aware that all the northern states including his home state Katsina and the entire southern states have unanimously rejected open grazing of livestock and approved ranching Ortom insists the Presidency is whipping a dead horse on the issue of grazing reserves.