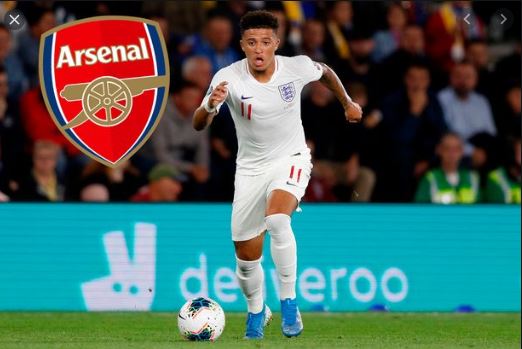 It has been revealed that Manchester United are leading the race to sign Dortmund wonderkid Jadon Sancho in the summer transfer window.

Though the Old Trafford club are deemed favourites to land the England international on a transfer fee at the excess of £100million, but it is revealed from the report reaching National Daily that Sancho enjoys an affiliation with Arsenal.

It has emerged that Sancho has remained in a daily communication with Arsenal forward Reiss Nelson via WhatsApp chat.

“I’ve got love for him; he’s got love for me,” said Sancho, as reported by FourFourTwo magazine back in 2019. “We just keep on pushing each other.”

Nelson, who was on loan at German club Hoffenheim at the time, added: “We message each other every day. If he’s got a game a day before mine, I’m like, ‘Sanch, you know what you have to do’.”

This existing relation has excited the Gunners fans who wished that it could lead to the Borrusia Dortmund talisman choosing the Emirates as his next transfer destination ahead of the Old Trafford.

Meanwhile, the above development has caused little or no worries for the Red Devils fans who have been recently fascinated with the series of hints dropped by Sancho in recent week tipping him to complete his transfer to United

National Daily gathered that the Red Devils fans recently celebrated Sancho’s latest hint while filming a latest Instagram Live when the young English wonderkid was told to take a sip of water if he intends to sign for Manchester United.

Sancho responded to the message by taking a sip of water from his bottle, much to the delight of the Red Devils supporters who had tuned in.

The Instagram Live has appeared as a vital avenue and tool of expression lately as celebrities have been making full use of the medium during the ongoing lockdown.

National Daily recalls that Manchester United legend Rio Ferdinand has been releasing his personal videos from time to time.

In one recent video, Ferdinand discussed the possibility of United signing Sancho, and spoke out about why he rates the teenager so highly.

“He’s one of the best young kids in the world at the moment. He has been unbelievable, he’s a player of huge potential,” said Ferdinand of Sancho.

“Sancho will go for over £100million – it’s the potential you are buying, someone who will be at your club for 10 years.

“It’s massive money but I’d take him. I’d tell him ‘You’re the guy we are going to build the team around’. He’s got that X-factor.

“He has all the potential to be a humongous superstar. He brings the playground to the football field. Not many people do that.”