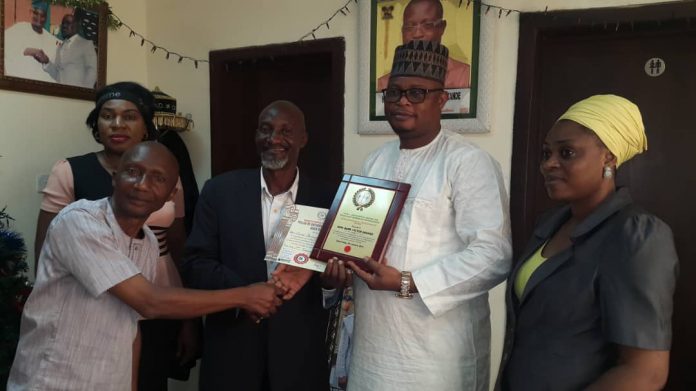 The Lagos lawmaker,representing Ojo constituency I, Hon.Victor Akande received the Distinguished West African Icon of Peace Award for qualitative representation of his
constituents and contributions to peaceful co-existence.

The award was given by a Ghana-based NGO, Intra-Continental Media Network in recognition of Akande’s sterling feat in his career and immense contributions to the social-economic development of the people.

Presenting the award, Otunba Larry Ayodeji, publishers of Today’s People International, Leadership Mirror and the Strategist Magazine said that the NGO’s representative in Nigerian recommended the lawmaker for the award.

Ayodeji, who led the NGO delegation, commended the lawmaker for commitment to impacting lives of various ethnic groups in his constituency, saying that led to his victory at the primary election to run for second term and the more reason they decided to induct him as grand patron of the NGO.

“Our organization’s recognition of your achievements and philanthropic contributions to the indigent people and their social development makes us to honour you today. We are inducting you as our Icon of National Development for your contributions towards  advancing national development through legislation and motions.

“This award is in recognition of your outstanding efforts in guaranteeing peaceful coexistence of the various ethnic groups in Nigeria (residents in your constituency).This plaque is given to you as an icon of peace. You have been creating peace among various group in Ojo Local Government and its environs as we all know that Ojo is volatile,”Ayodeji said.

He urged the lawmaker to continue contributing to peaceful coexistence and putting smile on the faces of the masses.

In his response, Akande, representing Ojo Constituency I at the Lagos State House of Assembly said the honour conferred on him further place a big responsibility on his shoulder.

“This honour done on me places additional responsibility to the people and the nation in general.
If people from Ghana are watching what I am doing here, it means people all over the world are watching us as representatives of the people.
Akande, Chairman House Committee on Science and Technology said, “I set out to help the people within my community; I dedicate the award to my late parents for their agnanimity and selflessness, a path I have chosen to thread,”
According to him, his constituents should consider his achievements in the first term and vote him again for better service.

“My constituents know they have not had representation of this manner before. I have tried as much as possible to bring the dividend of democracy to their doorstep.I see myself as actually being sent by God to put smiles on their faces and joy in their hearts,” he said.