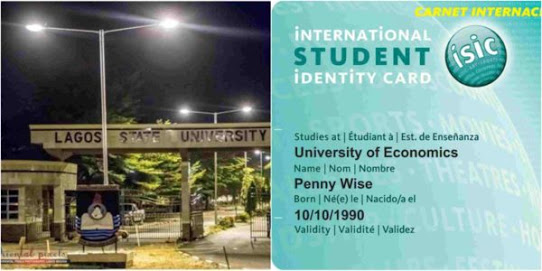 Lagos State University (LASU) says it has introduced an International Student Identity Card (ISIC) to serve as a valid proof of identification for its students worldwide.

According to LASU’s official bulletin registration for the ISIC commenced on Monday and will end on April 30.

The bulletin said that ISIC would give LASU students an opportunity to be part of the largest globally recognised, acceptable and verifiable students’ identity.

It says the UNESCO-endorsed ISIC is a passport for reasonable discount on goods and services for students in selected enterprises globally and enables them to pay less on trainings and courses.

“It is a single card for identity, payment and access to deep discount worldwide and gives the students an opportunity to save money daily both home and abroad.

“It offers discount on travel, shopping, museum, food, entertainment, transportation, education, among others,” it said.

The bulletin said that ISIC also offered scholarship worth 10,000 dollars yearly in partnership with Global Study Awards British Council IELTS and STUDY PORTAL and students registered under it could benefit.

In another development, the university has directed its students to swear a court affidavit to be of good conduct.

LASU said the directive was issued against the backdrop of poor attitude, moral laxity and some negative acts displayed by some students of the institution.

“In view of this, all students are hereby requested to submit the sworn affidavit on or before May 15, as failure to comply with the directive by any student will attract sanctions,” it said.