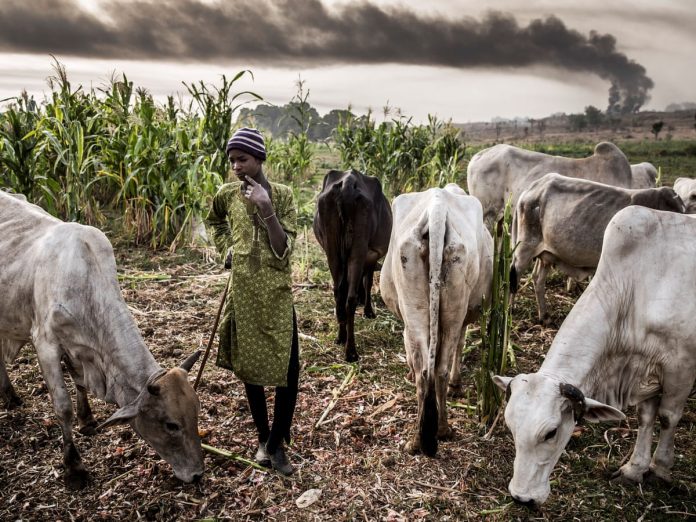 Our Minister of Agriculture is Alhaji Muhammad Nanono from Kano State. The Minister of State for that ministry is Alhaji Mustapha Baba Shehuri from Borno State. You are wondering why the two of them come from the far north? Where else do you have farmers in Nigeria except in the North East and the North West?

If you sincerely desire an answer to that question, you will need to ask your president, Muhammadu Buhari. My interest in discussing that ministry, however, is not the bigness of the babanriga sweeping its floor and its purse. I am interested in how, between those two gentlemen, the agric ministry became the ministry of religious affairs.

The ministry of agriculture under them, recently built a N30 million mosque for a community in Borno State and they justified it as being “appropriate in all ramifications.” They said they built the mosque for livestock farmers displaced by Boko Haram. So, how about farmers displaced by bandits in Benue, Niger, Zamfara, and those sacked by herdsmen in Oyo?  If you are as troublesome as I am, you are likely to ask more questions.

The mission and mandate of the Federal Ministry of Agriculture is stated on its website. The ministry says it “has the mandate to ensure food security in crop, livestock and fisheries, stimulate agricultural employment and services, promote the production and supply of raw materials to agro industries, provide markets for the products of the industrial sector, generate foreign exchange and aid rural socio-economic development.”

I can’t see ‘praise and worship’ there. But that is what the ministry did with my money and has proceeded to tell me and all others who may not like what it did to shut up.

The news of this ‘act of worship’ broke a few weeks ago. I have waited to hear or read of a rebuke from the person who employed those who did it. It would appear that a rebuke would come from the Villa the day the sun rises from the West.

The gentlemen who did it have even moved on to other things like tracing grazing routes and cow roads and things like that. I have waited to hear custodians of faith from the far north repudiating that expenditure as a sinful act.

But there has not been one voice of reason from that pious zone on that misbehaviour. There is inverted spirituality here. The elite in that part of the country use religion to worship their politics and inanities. But I am a Muslim, so why am I wailing here? Where I come from, no matter what religion we profess, we see warts as intrusions into our beauty; we slam acts like this as indefensible steps in governmental misconduct.

That is perhaps why former President Goodluck Jonathan a few days ago described Western Nigeria as “the only part of Nigeria that has been able to manage religion and development very well.” Why would a religious nation see nothing wrong in using filthiness to water the flowers of piety? Even the direct victims of this baldness of sense in governance applauded it.

Maybe we should just keep quiet and pretend that it is normal for the ministry of agriculture to leave grains and tubers and start planting mosques and churches here and there.

An American wrote that “without relentless scrutiny, the government will misbehave.” The rational must agree with that point of view. Nigeria is right in the eye of a food crisis yet our Federal Government, through its ministry of agriculture, is working furiously to address hunger by building worship centers. Our country is officially recognized by the United Nations as a ‘famine country.’

There is trouble everywhere you turn in the land – and we all know it. The World Food Programme once stressed that “by the time a famine is declared, it is too late. . . it means people are already dying of hunger.” We know this is true with us from the north to the south, yet we have a government that is drooling behind cows and planting prayers with money meant for farm works.

Farmers loiter around their homes in Nigeria because pampered bandits and terrorists have chased them out of their farms. There is, therefore, a pandemic of hunger in the country with only the very rich inoculated against it by the system.

On December 10, 1948, the General Assembly of the United Nations passed Resolution 217 A (III) through which it declared the right to food as a universal human right. Yet, as I write this, 73 years after that declaration, the figure from the world body exhibits Nigeria in the throes of starvation.

The UN has stated that as many as 5.1 million people in North-East of Nigeria alone faced starvation which would manifest between June and August 2021. Yet, it is in that very North East that the government is misbehaving, applying scarce money to fund faith.

There is a country called Venezuela. If anyone is in doubt of where a mismanaged country is headed, that is the current example. A journalist’s account of what that country has managed to become is sobering: “Most Venezuelans eat fewer than two meals a day. People awaken late in the morning so they can skip breakfast and go directly to lunch.

Water scarcity has made us bathe in nearby rivers; water plants are not working to capacity. All of this speaks eloquently to the national mismanagement of resources…” Bloomberg also has an example: “She’s crying. And she’s furious.

Both she and her husband have lost their jobs, she explains in a rapid-fire staccato, and so she had been doing hairdressing work to help make ends meet. That, too, ended when she decided to sell her scissors and blow-dryer to pay some bills.”

The Bread for the World Institute has an elegant description of Venezuela’s tragedy: “The nation’s economy and political structure collapsed even though it possesses the world’s largest known petroleum reserves.

More than 5 million people have now fled the country and an estimated 91 percent of those who remain live in poverty. Nearly a third of all Venezuelans—more than 9 million people— are food insecure or malnourished.” In Venezuela, traders set prices and sell in American dollars because the country’s local currency, the bolivar, is worth less than the wrapper on sweets.

But any normal Nigerian would read his country in the Venezuelan horrid story. We are there already. During the last sallah, I was to buy crates of Coca-Cola and Fanta in a shopping mall. But the sellers asked me to choose one of the two products; “you can’t buy both,” the cashier told me.

I didn’t understand. I asked why? There is a scarcity of these products, someone whispered to me. The picture got clearer this last Saturday: an alarmed shopper photographed and posted online what he saw on a fruit juice shelf in a popular supermarket: “Dear Customer, kindly note that you can only buy 2pcs (two pieces) of juice (per customer) due to low stocks of juices.”

Everything takes us back to the structure of Nigeria. There is nothing you won’t see in a structurally defective country. What is the business of the Federal Government intruding into building worship houses? Someone in Kano would wonder why anyone would be wasting his time writing about this.

He would say it is spiritual, normal and politically correct and makes a lot of sense to embrace religion and abandon farming. But where I come from, we say what is not good is bad. A ministry of religious affairs building a worship house is within its mandate. A ministry of agriculture declaring its building of a worship centre as ‘appropriate’ is aberrant.

In a Nigeria rebuilt to its original shape, there won’t be an overfed Federal Government itchy to misapply resources. That is why the south is loud and insistent on federalism as designed by its authors. But the political north would rather protect what they see as their advantage in the current setup. Is that why the two ministers in the agric ministry are northerners? What is so special about that ministry that it has to be cocooned in the bed chamber of the north?

Someone said the elite of the north are already sculpturing ‘restructuring’ in the image that suits their greed. They think the south is a fool forever. They want the beat of death to sound on. You read a former Nasarawa State governor, Abdullahi Adamu who would rather see the southern demand for sanity in this federation as separatist.

He was in the news on Sunday lambasting southern governors. He said by making structural demands of the federation, “the southern governors are sounding like a broken record..” He then, for emphasis, proceeded to ask his interviewer: “You know what a broken record does? It cracks.” He said each of the governors “is under an oath of loyalty, and of preservation of the sovereignty of this country.”

He said “that means that each of them is duty-bound to stay away from any act, or word that has the tendency to be perceived as being separatist…” What else have the governors done beyond banning trekking of people from the north to the south, grazing cows and spreading devastation, death, rape and tears? But Adamu, like his other people, would rather invoke the right of the trekkers over the customary and legal rights of the land owners.

He even issued threats. He said: “These governors know the constitution, and they know that every Nigerian has the right of movement, association, and the right to pursue legitimate goals.

However, if these governors are saying no to cattle routes and open grazing, what are the alternatives that they have provided? If northern governors come together and take a position, what will happen? What right have you to tell Nigerians not to move freely? If northern groups also say no to southern businesses in their domain, how will that end up?

There is a limit. Not that we can’t talk. We have the capacity to do more. But what we won’t take lightly, is for any part of this country to think that they have a louder voice. That is not true. When the North starts talking, maybe there will be sense. If we want this country to stay on, we will.” Interesting.

Adamu said “when the north starts talking, maybe there will be sense.” But that is exactly what the south is asking the north to do. Come out and TALK and let Nigeria have ‘sense.’ A sensible Nigeria will work well for all; it will not defend the ‘right’ of some people to suffer, to trekking barefooted from Kaura Namoda to Katsina Ala, and down to Kara Market in Lagos. A Nigeria with ‘sense’ will not load a federal ministry with persons from a part of the country to enable crass misbehaviour to fester. It won’t.

Adamu should lead his brothers to come out and talk. Keeping quiet and manipulating one part of the oppressed against another will expire soon. And when that happens, it will be too late to raise a hand and say, “excuse me sir, I have something to say.”