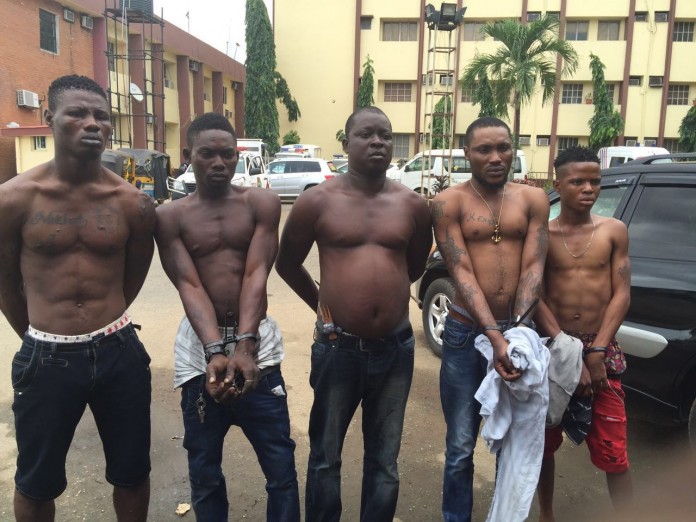 It was the end of the road for a notorious leader of a cult group in Lagos as he was arrested over the weekend by operatives of the Rapid Response Squad (RRS) of Lagos State Police Command in Jakande Estate, Ajah.

Andrew Awalebi, 35, who was arrested with his accomplices said that no amount of gun shot  can penetrate his body as he has fortified his body with native charms.

He added that the protective charm was specially prepared for him by an herbalist in Ijebu – Isiwo, Ogun State to save him from gunshots of land grabbers in Lekki.

The suspect, who belonged to Eiye Confraternity, was said to have been arrested on Friday morning at a beer parlour in company of three other cult members around 8:00 a.m.

The other members of the cult group identified as Adegoke Adeleke (30), Kehinde Adebogun (31), were also picked up early Saturday morning at an hotel in Ikorodu.

Awalebi, who hails from Ilaje Local Government, Ondo State was given out by Michael Thompson of the same Eiye Confraternity as a cult leader. Thompson was arrested a night before for robbery at the National Stadium Surulere, Lagos.

Awalebi, who works with a popular land owner in Lekki stated that he earns N40, 000 monthly from the property dealer for helping to protect his landed property in the area.

He added “I was initiated into Eiye Confraternity in 1996 by Banji Omisore and later in 1997 I was promoted as its topmost leader after the death of Omisore.

“We are eight members in the cult group. We meet very early in the morning or late at night. I have been arrested by Special Anti – Robbery Squad sometimes ago when my cult group caused mayhem in Jakande Estate, inflicting injuries on passers-by in the area”, he disclosed.

Arrested alongside Awalebi were Michael Thompson (24), Adegoke Adeleke (30), Kehinde Adebogun (31), Koffi Kwame (17), Daniel Olayiwola (36) and Tosin Issac (26) and have all confessed to be members of Eiye Confraternity.

Confirming the arrest, the spokesperson, Lagos state Police Command, Superintendent of Police, Dolapo Badmus, warned parents and guardians to be wary of their children and the behaviour of their wards.

“Charity begins at home. But this should end there. Parents should help police to tackle cultism in their respective localities. They should endeavour to report to the nearest police station around them if they suspect movements of their children, this would help the Police to nip in the bud the menace of cultism”, she advised.
She added that the cult suspects have been transferred to the State Criminal Investigative Department (SCID), Panti for further investigation.