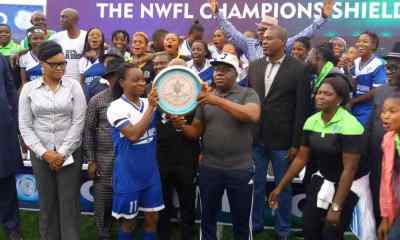 The Nigeria Women Premier League Champions Shield will hold this weekend at the Samson Siasia Stadium, Yenagoa between 2018 League Champions, Bayelsa Queens and AITEO Cup Champions, Rivers Angels.
National Daily Learnt that the Restoration Ladies’ won the Nigeria Women Premier League for the first time in 2018 since winning it back to back in 2006 and 2007, while Rivers Angels won their eighth AITEO Cup title beating Ibom Angels at the Samson Siasia Stadium. Both teams will be looking forward to crowning up their respective titles with the traditional Champions shield on Saturday.
Away from the traditional curtain raiser, this year’s NWPL Champions Shield is coming at the middle of the league campaign and this makes it even more special and unique.
Moving onto Saturday’s game, it’s difficult to confidently pick a winner as both sides have shown great qualities in the league as they are seated on top of the logs in their various groups.
Rivers Angels won the Champions’ Shield last year in Lagos and would want to do that again in Yenagoa on Saturday. Meanwhile, coach of Bayelsa Queens, Moses Aduku, a Nigerian ex-international, has viewed the Champions Shield as an actual trophy and has told his players they need to give their all in the game.
Edwin Okon is known to want to win everything and will surely field a strong line up against the ‘The Restoration Ladies’  and hoping he can add the shield to his gallery of trophies.
Both teams will be missing some of their key players due to national team assignments but it doesn’t stop the clamour and excitement that the Champions Shield is known for.