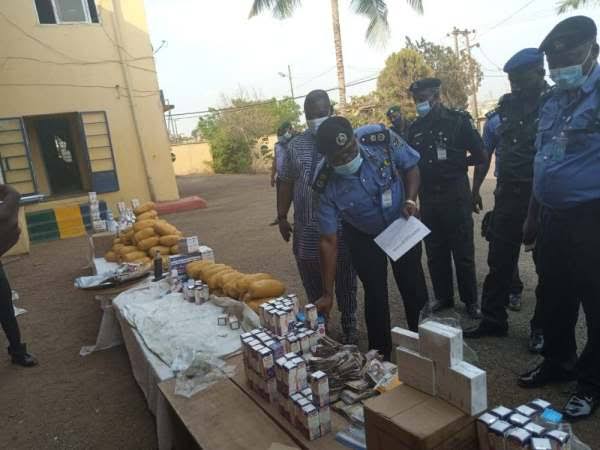 Share this on WhatsApp
Police raid notorious hideout of illicit drugs cartel known as “MAYAS” in Lafenwa area of Abeokuta, Ogun State.
The items recovered at the scene include: 110 parcels of weeds suspected to be indian hemp, 55 packs of codeine, 2 packs of Emzoline, 6 packs of uniplex codeine, 4 packs of pandeen expectorant, 12 packs of Rephnol, 3 packs of backwoods honey, 1 carton of max caught codeine, battle axes, cutlasses, dangerous charms and the sum of ₦2,222,750.00.
In other news, spokesperson of the Nigeria Police Force, Frank Mba, says security forces in Nigeria are miracle workers due to the severity of challenges they face.
Insecurity has been a constant problem in the country over many years, with the recent uptick in violent bandit activities, especially in the northern region, being of particular concern.
He recently made this statement during a Channels TV interview.
He said despite the challenges, officers are working round-the-clock to provide a safe and secure environment for Nigerians to live in.
The commissioner of police said, “Looking at the hard ground under which we function and looking at the very asphyxiating, sometimes almost poisonous, environment that we operate, it is indeed right for us to actually be called miracle workers.
“The truth is no Police agency anywhere in the world can rise above its society in terms of how the society wants it to operate. Every society gets the kind of Police it deserves.”
The Police spokesperson said the Force needs the backing of political authorities to make progress in terms of funding, provision of logistics, remuneration, retirement benefits.
He said officers of the Force need to be motivated so that their work can become more effective in keeping the country safe.
“We’re glad that some of these things are receiving attention but a lot still needs to be done,” he said.
Mba noted that kidnapping and banditry is hard to police in the north due to the region’s considerably larger landmass, and proximity to the troubled Sahel region from where arms are more easily smuggled into the country.
He said the Force has started to focus on cracking down on organised syndicates fuelling arms smuggling, and expressed confidence that the problem will soon be contained.
Share this on WhatsApp