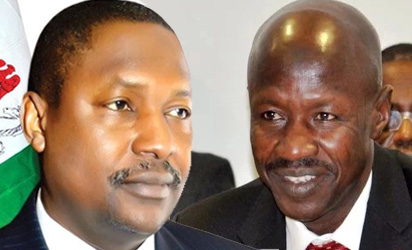 Share this on WhatsApp
Spread the love
The office of the attorney-general of te federation and justice ministry has again accused the EFCC of frustrating the government effort to tackle corruption in Nigeria.
An ad-hoc committee the president set up to reposition the Nigeria Financial Intelligence Unit and restore its membership of the Egmont Group of Financial Intelligence Unit has also been dragged into the fray,
The AGF office claimed the committee was complaining the commission Ag Chairman Ibrahim Magu is stalling the committee progress by blackmailing AGF Abubakar Malami.
There has been a back-and-forth between Magu and Malami for over a year now, one accusing the other of not halting the anti-graft campaign of President Muhammadu Buhari.
A statement issued by the AGF Special Adviser on Media and Publicity Salihu Othman Isah said there are documents to prove Malami is working hard to ensure the NFIU returns to the international anti-graft group.
“However, it is a sad tale to tell how the Acting Chairman, Ibrahim Magu-led EFCC has frustrated these efforts and even had to resort to blackmail in some instances oftentimes, alleging that the AGF and the Ministry were all out to impede the government’s anti-corruption drive.”
Isah said Magu and other EFCC officials, and at times through online publications, have been accusing the AGF of trying to compromise the war.
ALSO SEE: Buhari under fresh pressure
According to him, the EFCC have always perceived the Office of AGF as a threat instead of addressing the issues related to the best strategy to fight corruption advocated by the AGF.
The committee was set up by Vice President Yemi Osinbajo after the EGNFIU sanctioned Nigeria in July for breaking its rules and regulations.
And Nigeria even stands the risk of expulsion if the NFIU doesn’t get its act together.
That month the Senate passed a bill seeking to establish the Nigerian Financial Intelligence Agency (NFIA).
Many believe it was a drive to emasculate the EFCC in prosecuting financial crime offenders.
The committee, headed by Sen. Chukwuka Utasi of the Senate committee on anti-corruption and financial crime, has also noted that the NFIU must be free-standing to be effective its financial intelligence operations.
Share this on WhatsApp