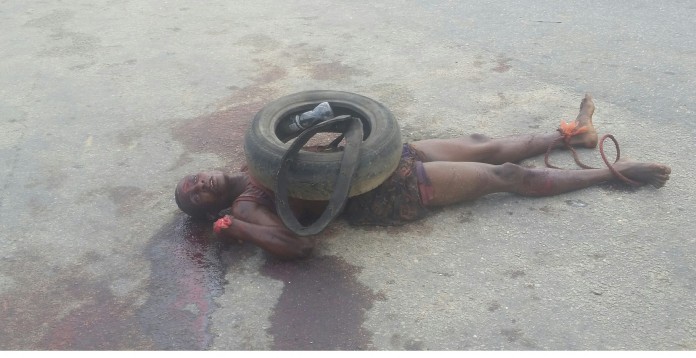 A suspected notorious criminal has been lynched by frustrated residents of parliamentary extension around the popular Brook Church in Calabar, Cross popularly called ‘Papa the Cheater’ who is said to have terrorised the community for some time now.

An eye witness account have it that the deceased was murdered by angry youths in the wee hours of today when he was caught carrying out his usual criminal activities.

According to a source who pleaded anonymity, “Papa is a notorious criminal who has been terrorizing the entire Ikot Ansa, parliamentary and parliamentary extension for years.

“Each time he is arrested, he will find his way out of police net unpunished. So this morning when we saw him lying dead here, we all heaved a sigh of relief because we can now sleep with our two eyes closed.

“From what you can see here, he may have been killed by angry youths who reside here. And this possibly happened this early morning because the blood and the cuts are still very fresh and from what we have seen, he was killed some distance away from here but was dragged to this junction where everybody will see”.

When our reporter visited the scene, it was observed that the left hand of the deceased and his right wrist were cut off and taken away thereby raising concern over his real killers.

Another source who also spoke in confidence said that “While the deceased is a known criminal to residents of this area, the circumstances surrounding his death has raised serious concern because some parts of his body were cut off and taken away.

“I suspect there is more to this than the mere fact that he was killed by angry youths who were tired of his criminal activities. No doubt, he has terrorized us, in fact he can carry your generator and run 200 meters without being caught that’s why he got the name ” Cheater” but the fact that his hands have been amputated and yet to be seen, raise suspicion on his true killers”.

When contacted, the state Police Commissioner, Jimoh Ozi-Obey confirmed that he was a wanted criminal who was killed by angry mob who caught him stealing Generator.

“Yes I can confirm that we saw a corpse like that on the road this morning and we gathered that he was killed by angry mob who caught him stealing generator. He is one of the people terrorizing Calabar and we have deposited his corpse in the mortuary.

“I want to appeal to members of the public not to take laws into their hands. If they suspect anybody, they should report to the police because now that they have killed him, we won’t be able to get him to mention some of his associates”, the CP said. 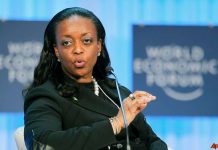