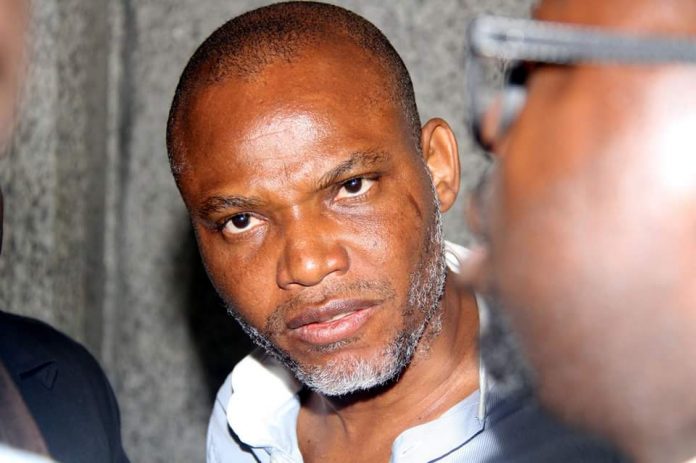 The human rights organisation, Amnesty International has slammed the decision of the Federal Government to restrict journalists that covered the court trial of Nnamdi Kanu, leader of the Indigenous Peoples of Biafran (IPOB).

The Department of State Services (DSS) barred some sections of the media from covering the trial of the leader of the Indigenous People of Biafra, Nnamdi Kanu.

The DSS barred The Guardian, Vanguard, The PUNCH, Daily Trust, Tribune, Daily Sun, The Cable, and Daily Times, among others.

However, the secret police refused to give reasons for picking 10 media houses while barring others from covering the trial.

As a result, Amnesty International in a statement on its official Twitter page on Monday condemned the authorities for selecting few journalists to cover the trial today in Abuja.

“Amnesty International condemns Nigerian authorities’ restriction of the number of journalists that can report the trial of the leader of Indigenous People of Biafra (IPOB) Nnamdi Kanu, which started today in Abuja,” @AmnestyNigeria tweeted.

“Selecting few journalists to cover the trial is a restriction on access to information and an attempt to deny people the right to know. It also violates all fair hearing guarantees.”

“We call on the Nigerian authorities to respect the right to fair hearing and immediately lift the restriction and allow the media unhindered access to the court to do their job. This is yet another bizarre and unacceptable attack on the Nigerian media that must not stand”, the body stated.

Kanu is facing an 11-count charge of treason, treasonable felony, terrorism and illegal possession of firearms, among others.