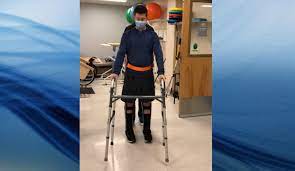 The B.C. man after 15 months of seeking federal vaccine injury support program (VISP), received approval for compensation for COVID-19 vaccine injury he sustained after the second jab, which caused him paralysis.

The victim, Scholefield, narrated that he received the first Pfizer vaccination in May 2021; and six months later, he went back for his second shot, feeling everything was fine. According to him, he didn’t even have a sore arm after receiving the injection.

The Okanagan resident said that two weeks later, things began to take rapid turn for the worse when he and his family were spending a day out on the lake.

Scholefield had stated: “I was sitting, driving the boat. I realized my left leg started to feel funny and tingly.

“And it didn’t go away. In fact, it started to get worse.”

Scholefield, within two hours, was paralyzed from the waist down, causing him to spend three months in three different hospitals.

According to him, “a neurologist who really took an in-depth study into my case did further testing on me, and was able to essentially eliminate any other causes except for the COVID (-19) vaccine.”

Scholefield confined to the wheelchair-bound, had filed for the federal vaccine injury support program (VISP) in September 2021. He said that he sent all the necessary information and continuously called his support work to check on his status.

Fortunately, after 15 months, a decision was made. According to Scholefield, “Just yesterday, I did get documentation that states that they have approved my claim and that the next step would be to be determining the dollar value of that.”

The vaccine injury support program,  had in a statement, indicated that there are “several reasons as to the lengths of time it takes to process a claim.”

Senior support worker of the program, Edward Maier, stated: “Each claim is unique and varies in nature and complexity. As such, each claim poses its own hurdles and often delays are specific to the unique claim itself.

“It is also important to highlight that the VISP is meant to compensate for serious and permanent injuries. As such, we can also have direction from our medical team that some conditions/injuries will improve over time, and that more time is needed to evaluate if the injuries are, in fact, serious and permanent.”