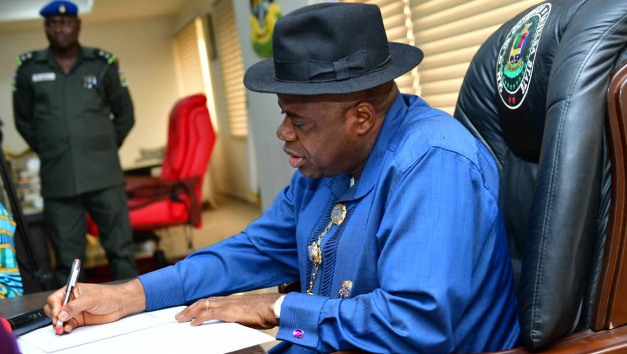 The Bayelsa government, on Thursday denied media reports which said that the relationship between Gov. Douye Diri and his predecessor, Sen Seriake Dickson, had become frosty.

The Bayelsa Commissioner for Information, Orientation and Strategy, Ayibaina Duba, stated this in a statement issued in Yenagoa while reacting to the news reports published in some online platforms.

The government also dismissed claims that Gov. Diri is causing division in the state chapter of the Peoples Democratic Party (PDP).

Duba described the reports as unscrupulous, adding that the insinuation that the governor is ungrateful to those who worked for his victory at the 2019 governorship election is “based on some unverified and bogus assumptions,”

The News Agency of Nigeria reports that Dickson had, in a statement on Tuesday, dissociated himself from the allegation and pledged his support to Diri.

The Commissioner said that there was no evidence to sustain the claim of disagreement between Diri and Dickson, stressing that it smacked of ‘beer parlour gossip’.

Duba said the governor is appreciative of Dickson’s support and has rather been a preacher of peace and unity across the state.

He explained that Diri has also initiated practical efforts at strengthening and keeping the PDP united and enjoyed a cordial relationship with Dickson.

He said if anything, it was the author of the misleading and bad-intentioned piece “that seeks to divide the party along the lines of the former APC members and old PDP members.

Duba said the author also wanted to divide the party along the lines of Diri’s loyalists and Dickson’s loyalists “due to his lack of tact and shallow understanding of party politics and governance.”

He said, “On the contrary, these two sons of our state have continued to enjoy harmonious relationship based on mutual respect and in the best interest of our state.

“The Governor has continued to demonstrate good faith and is appreciative to the fingers of God that were used in making him governor and is eternally grateful to God for his elevation.

“In the last two years, the Governor has committed to unifying the party by insisting that every party man has equal right.

“He has also invested a lot of time and energy at bringing back members who defected to other parties and assuaged the concerns of stakeholders, fortifying the party in the process.

“The governor has also continued to preach peace and unity among our people and succeeded at engineering convivial relationship between the contending political groups and communities in the state.

“Therefore, how can any discerning person come to the conclusion that the unifying efforts of the governor will divide the party?”

The Commissioner, therefore, advised the author and his likes not to be unnecessarily over-excited about the ongoing usual political frenzy associated with party nomination.

He said that Diri would not only continue to work for peace, unity and well-being of Bayelsa but also ensure that party politics is done in the best democratic tradition without imposition of candidates.