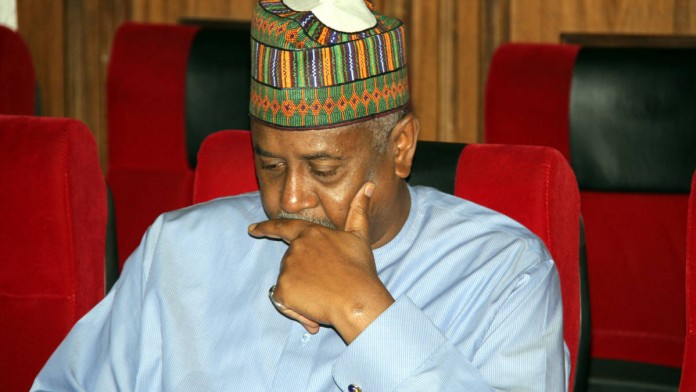 The panel added that the manner of arrest also negates the provisions of Section 28 of the Nigerian Police Act.

The court also held that the further arrest of Mr. Dasuki by government on November 4, after he was granted bail by a court of law, amounts to a mockery of democracy and the rule of law.

It then ruled that federal government should pay a sum of N15 million as damages toDasuki. The cost of litigation will also be summed up and charged against the Nigerian government.

Dasuki has beenholed up  Nigeria’ s State Security Service detention, from where he’s been going to court to face series of trials over the allegations $2.1 billion arms vote misappropriation, and unlawful possession of firearms when he ceased to be nsa last yer.

He approached the ECOWAS court after he was rearrested by members of Nigeria’s State Security Service shortly after meeting his bail conditions in November last year.

The Police Act states that a superior police officer may authorise the search of a resident belonging to a suspect assumed to be in illegal possession of an item, if the officer so authorised has a search warrant.

The court also noted that Section 143 of the Administration of Criminal Justice Act, ACJA, allows that where such a search is proposed by the police or other authorities, an application must first be made to a court of law and and granted after due consideration of the said application, in compliance with section 144 of the ACJA.

According to the panel, the submission of Nigerian government that it came with the search warrant to Dasuki’s house but could not give it to him, because officers at his residence resisted the security operatives, was ineffective.

The judge said the search warrant presented before the ECOWAS court was not certified and therefore lacks verifiable authenticity.

Although the ECOWAS court is not ready to determine whether or not the possession of arms by Dasuki amounted to an offence or not, it insisted the arrest was unjustified.