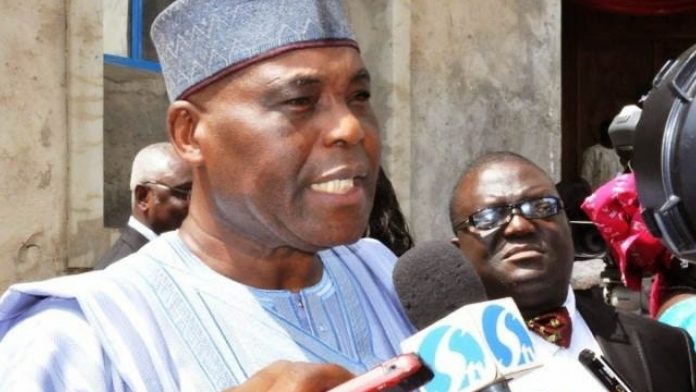 Chairman of DAAR Communications Plc, Engr. Raymond Dokpesi on Monday said the emergence of Indigenous People of Biafra (IPOB) and its influence across the South East has complicated and undermined the agitation for patriotic Nigerians of Igbo extraction to lead this nation as far as the 2023 election is concerned.

In a statement on Monday, Dokpesi stated that if an Igbo president is voted in, Nnamdi Kanu, leader of IPOB, would use militant tactics to blackmail and force the President to declare the South East independent of Nigeria.

“I have publicly come out to support and call on a South Eastern presidential candidate in the recent past, but the emergence of IPOB and its influence across the South East has complicated and undermined the agitation for patriotic Nigerians of Igbo extraction to lead this nation as far as the 2023 election is concerned.”

“If nobody has told Ohaneze Ndigbo before, the concern today from some other regions is that if Nnamdi Kanu plays the role of Aguiyi Ironsi in leading a militant revolt against constitutional government in the south east under Igbo presidency, the president will be pressured by his base to facilitate the UN processes for the South East to call for independence from Nigeria. Thus an Igbo President may be compromised in protecting the political and geographic boundaries of Nigeria whilst Nigeria remains under the threat of IPOB’s secessionist activities.”

“We have to negotiate with other regions and where prominent leaders express such concerns based on the similarities of our history and contemporary circumstances, it indicates to me that the South East is not trusted with the Presidency in 2023. It indicates to me that the leaders of the South East have not done enough before now in dealing with and addressing the challenge that IPOB poses to their aspirations in leading Nigeria.

“Why and what to do to change this narrative is a question for leaders and politicians from the south east to determine but you can see and understand why we in the PDP must take a realistic, pragmatic and strategic approach towards supporting the North East zone for presidency in 2023.”

“In Atiku Abubakar the South East not only has a friend and a detribalised Nigerian who understands the pains, frustrations as genuine aspirations of the people of the South East, but also is a believer in the restructuring of Nigeria, which both in the short term and in the long term, is necessary and critical to the growth and development of Nigeria in general and to the minority regions in particular.”

“By supporting Atiku Abubakar from the North East to victory in 2023, the rotation of power across Nigeria will have come full cycle and I believe that the agitation for a South East presidency will be better accepted and appreciated by the incumbency and other regions in subsequent elections after 2023.”

“So taken in totality I do not intend to offend the south east or any of its eminent sons who are more than qualified to lead this nation. The south south and south west regions have already produced PDP presidents in the fourth republic, so we have had 14 years in the presidency, while the north has only had 2-years under PDP.”