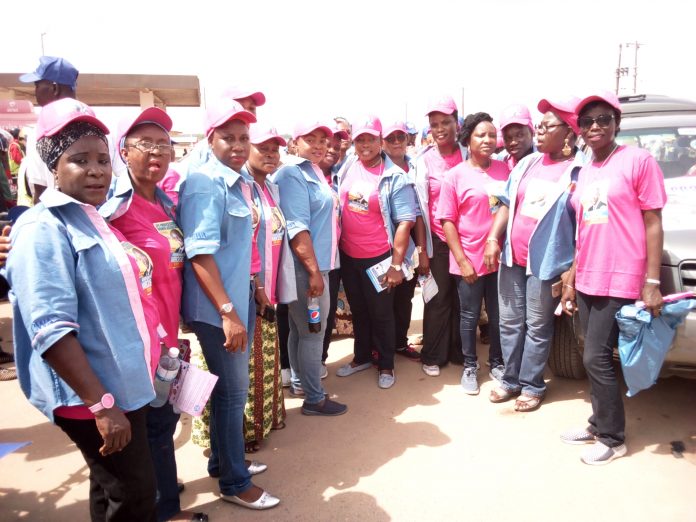 They cited the fact that prior to now, Epe one of the five divisions
in the state have been backwards in terms of development, but the
Governor Ambode led administration have been striving hard to right
the wrongs.

The rally took off at the popular T- junction with the women who were
spotting Pro Ambode T-shirt and Caps distributing handbills on the
need for residents to collect their permanent voter’s card (PVC) and
vote for Governor Ambode.
At every opportunity, they met with the people one – on – one
stressing the need to vote for the Governor to continue the
transformation of the state and Epe division.
According to them, never in the history of the area has it witnessed
the kind of unprecedented development carried out by Ambode.
The impact of the message was perhaps amplified by the fact that the
handbills were written in both English and Yoruba language.
Speaking at the rally, the matron of the women professionals, Dr,
(Mrs.) Atinuke Onayiga said the exercise was to identify with the
lofty achievements of governor
Ambode.
“The Governor has distinguished himself in the area of infrastructural
development and proven to be a great supporter of Women’s rights.
Her views were corroborated by Mrs. Jumoke Razak (AKA jummy K) who
said EPWA and the entire people of the state were proud of Governor
Ambode’s achievements.
“Epe has been transformed into a ‘Small London’ we need to vote for
Ambode a second time for him to further deliver more dividend of
democracy to our people.

“Even the whole world knows Ambode commissioned 21 road in one day, we
need to pray for him and his wife. They are good people she said.
The publicist of EPWA, Mrs. Olushola Raji said the group was
apolitical and impacted
on the people even before the coming of Ambode.
She added that they felt the need to support the Governor to ensure
collaboration that  will uplift the people.