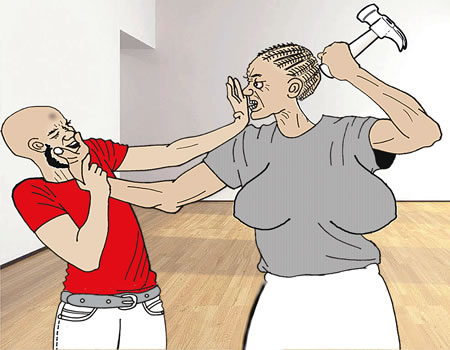 Share this on WhatsApp
Spread the love
A husband has revealed that his wife wants him dead by all means because he is  unable to give her a male child.
Mr Victor Nwobike told reporters of news agency of Nigeria that his wife of 13 years of marriage, mrs stella Iwu nwobike. Mrs Stella Iwu nwobike who is a staff of an oil and gas firm in Victoria island Lagos. she is a committed member of living Faith Church (winners chapel). sometimes last year June, she invited me to a church by name divine majesty prayer ministry at Ijesha Tedo for spiritual counselling.
The pastor of the  church said that, I was possesed by a female  demon which he claimed that I had an  affair with in port hacourt  some years back.The pastor of the church told my wife that I was possessed by a strong female demon, and she was advised by the pastor to divorce  me.
On the 17th of June 2018 at about 10:30 pm armed kidnappers in company of  my wife came into our home at lekki garden estate Ajah.I was abducted  and molested with severe gunbuts and barrel injuries and then taken away by four fully  armed men wearing  police uniform.They took me toward ogombo area of Ajah. On our way  my phone  rang  in my pocket  and it got them panicking.Along the Road they parked the vehicle close to a black honda car, one of the kidnappers came down and went straight  into the parked Honda vehicle, then I looked through  the window and noticed that the driver of the Honda vehicle was Mr Bennet Robert iwu who is my wife’s  elder brother,then the kidnapper that stepped out of the  vehicle came back  to our vehicle.
My phone was taken away from me and I was seriously roughhanddled and was thrown by the wayside to die gradually.
The case was formally reported to the ogombo police station which is still under investigation, the police compelled Mrs Stella iwu nwobike to produce the  kidnappers or face trial.
I spent the next three days at badu specialist hospital, due to the injury sustained
some weeks after my wife Mrs Stella  iwu nwobike invited her younger sister chioma Blessing Iwu to our home. four years ago this chioma Iwu was sent away from our home because  of her wayward lifestyle and bad influence on our two daughters.
On the 27th of July 2018 in the evening I noticed  in my room that my valuables, cash and documents has been stolen.
in the morning of 28th July I asked my wife Mrs Stella iwu nwobike! Who took away the valuables in my room? she got angry that why am i accusing  her of stealing.
She got into a brawl with me and while I was trying to calm her down she called on her sister chioma iwu who was downstairs at the guess room. She came with a broken bottle and started stabbing me all over my body, while my wife held me down. Having been stabbed and left to die while my wife looks on, out of fear of my life she quickly  called the police who then appeared at the hospital. That I am alive today was courtesy of  an uber driver, an angel sent by God to ensure that I live. on the issue of a loan of 5m as purported by my wife, she never gave me any loan and will never because I know who she is. please let her produce evidence of loan.  I am from a noble family and I am bound not to engage myself in certain act,  that’s the name my wife wanted to tarnish at all cost. The matter was hence transferred to criminal investigation department PANTI Lagos where my wife and her sister blessing were detained for 7 days there after where granted bail by Nigeria police. attached are picture of Stella iwu nwobike and her sister blessing and also pictures of the dastardly attack on me.
Share this on WhatsApp