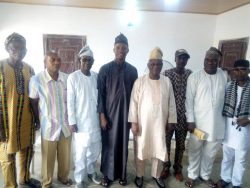 Hon. Rasheed Makinde, the Lagos House Assembly member representing Ifako Ijaiye II constituency,ahead of the general election has kick started a rapport building tour within his constituency, in appreciation of the support received in time past.
The lawmaker visited major political factors in the Ijaiye Ojokoro polity which includes;Royal Alliance, Justice Forum, Ifelodun, Lagos friend, Alhaji Hassan Ajeigbe, aka Amje, the APC Party Chairman and others.
The All Progressives Congress Apex Leader for Ifako Ijaiye and Ojokoro, Alh. S. A. Muhammed (Baba Ile Ogbo) commended Hon. Rasheed Makinde for showing gratitude to all caucuses and party faithfuls who actively ensured his reemergence as the party’s candidate in the 2018 primary election.
While delivering his goodwill messages, the apex leader expresses displeasure over the way the leadership of Ojokoro LCDA fleeced the aspirants of their hard earned resources with fake promises, yet they could not make any move to pacify the affected aspirants after the contest.
The Apex leader gave kudos to Hon. Makinde for his courage to have reconciled with all that contested against him, as he pledged to consolidate on his (hon. Makinde) gains in the reconciliation move to visiting all aggrieved persons.
“Though I felt disappointed of those chanting my name to be indifferent in reconciling all the aspirants. It is to my great dismay when some people gathered themselves under the auspices of Ojokoro leadership and were able to collect over 40million naira under false pretense from the aspirants and yet they were unable to pacify those that lost out of the contest, whose is to blame?
I was given 95,000 naira, but I rejected it because in my 30years of leadership I had never demanded money from any aspirant except if they bring it willingly as a form of appreciation. Stressing his comments, Alh. Adelaja later promised to lead reconciliation among all aggrieved members and aspirants as the party moves closer to the general elections.
Speaking while hosting Hon. Makinde and his team, Alhaja Zainab Adefolabi and Hon. James Osatuyi said, they were impressed by the sterling performance Hon. Makinde has recorded so far,charging him not to see anyone as his enemy, rather he should carry everyone along in his formation.
Reeling out the relationship between Justice forum and Hon.
Makinde, the Justice Forum Apex Leader in Ojokoro LCDA, Hon. James Osatuyi said, Hon. Makinde had been fair in his dealings despite the fact that he is from the Mandate caucus.
“In the primary election of 2014 which we all followed to the end and as a matter of fact, Justice Forum was among the groups that first adopted Hon. Makinde as a sole candidate in 2014 and 2018 respectively, and to the glory of God, he had never failed us for once and we will continue to give him our support .’’
In her own speech, the Apex Leader of Royal Alliance Ifako-Ijaiye LGA/Ojokoro LCDA, Alhaja Zainab Adefolabi said, “since the demised of our leader, my husband, Hon. Marufdeen Adeola Adefolabi; Hon. Makinde had never forgotten
Royal Alliance for once, as he has always got in touch with the House and we maintain cordial relationship, we pray you will not die young and you shall live to take Ifako-Ijaiye to an enviable height.
Also speaking the Lagos Friend Chairman Alhaji Fatai Adedokun condemned the inconsistency of the leadership of the party for not being proactive to reconciliations especially when it matters. He said until the leadership of the party put their hearts together, the party may continue to meet at cross purpose and the followers will be at the receiving end.
While addressing the leadership of Ifelodun, Royal Alliance, Lagos Friend and Justice Forum in separate meetings, the lawmaker, Hon. Rasheed Makinde expressed his appreciation for the leadership and members who stood solidly behind him at the primary election, urging party faithfuls to work more for the APC victory at the general  elections.
The lawmaker said continuity is very key for a legislator and his
constituency.
“In legislative business, there is hierarchy, and the more you feature at the chamber, the more you gather experience to represent the interest of your immediate constituency well.
” I have visited all my co-contestants in the primary election except for Mr. shina Are who had refused to be seen, I am imploring all and sundry to also help to pacify him, we are all winner nobody is a loser.
“I appreciate my brothers Hon. Dr. Korede, Hon. Olotu and Hon. Oladapo whom I’ve extended the hands of fellowship to and they accepted even before the team commenced the reconciliation moves.
“This is the height of maturity and submission to the party supremacy, I pray they shall all be celebrated too.” Makinde said.
Hon. Rasheed Makinde and his team also visited the APC Party Chairman, Prince Adewale Bello, who acknowledged the rumour of PDP covert moves to lure some of our members.
He said, “the PDP camp is in disarrayed as their Reps candidate is very arrogant, frivolous and even unacceptable by the majority of her PDP members not to talk of the public who are always with the APC.
“PDP is not a threat to us in Ojokoro LCDA, their assembly candidate is not residing in our local government, not known by anybody, even by the PDP themselves, so how do they want to market him, which market are they going to bring their candidates to? A market that is already dominated by APC! No cause for alarm as a grassroot, we are working underground to ensure victory, come February 16th and March 2nd 2019.
He however,commended Hon. Makinde and his team for going round to reconcile with those who lost at the primary election to him, “it shows we are all working towards achieving success for the party, I appreciate those who led the reconciliation team, they have done a great job.” Prince Bello said.