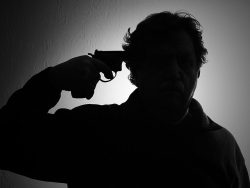 A consultant psychiatrist with the University of Ilorin Teaching Hospital, Dr. Ayo Omothoso, has urged the Federal Government not to continue to criminalise attempted suicide, saying that it is usually caused by depression.

The psychiatrist made the appeal in an interview with newsmen in Ilorin.

He said that depression was a mental illness and people suffering from it deserved sympathy from the government and members of the public, rather than condemnation.

Omotosho, who lectures in the Department of Behavioural Sciences, Faculty of Health Sciences, University of Ilorin, decried the alarming rate of suicides in the country.

He disclosed that about three million Nigerians are currently suffering from depression, while identifying sadness as one of its symptoms.

The don urged people around those experiencing depression to be supportive and to render help where necessary to prevent the victims from becoming suicidal.

“Those suffering from it have negative thoughts about themselves, the world around them and the future, because they have Depressive Cognition; they think differently,” he said.

Omotosho identified three ways in which a person could be predisposed to depression to include biological, psychological and sociological factors.

“The biological reasons include genetics. If someone’s parents were depressed, there is a higher chance that such a person at some point in his or her life will suffer depression.

“Then there may be interaction with hard substances, which may lead to brain changes and which may predispose to mental health condition.

“For the psychological factor, people who are pessimistic may be more prone to depression, so also those with low self esteem,’’ he said.

According to the psychiatrist, the sociological factor is triggered by life events such as losing a job, and negative or bad experiences.

“Significant things that happen to a person and he feels it is overwhelming and doesn’t talk about it may lead to depression,” he added.

Omotosho called for responsible reporting of suicide cases by the media, advocating more awareness on prevention of depression.

He cautioned the media to avoid detailed and graphic reportage of suicide, saying it could lead to ‘copycat suicide,’ which may lead to an increase in the rate of the menace.

The psychiatrist said prevention was a major concern even among practitioners, saying that there were some things one could not prevent like the genes one was born with.

He advised on healthy lifestyle and urged people to see their specialist to talk about their psychological issues.

According to him, there are some certain foods that have been identified to fight depression and are good for the mood like salmon; those foods that contains vitamin D that triggers happy hormones in the brain.

Omotosho explained that there was a relationship between sleep and mood, adding that when one does not sleep well, one is prone to be cranky during the daytime.