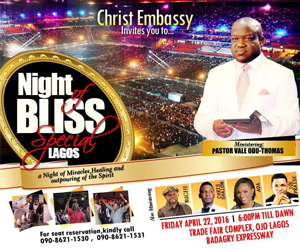 ALL across the city of Lagos, there is excitement in the air as the much-talked about Night of Bliss Special with Pastor Vale Odu-Thomas holds this Friday April 22, 2016 at the Lagos International Trade Fair Complex, Lagos-Badagry expressway, Ojo from 6pm till dawn.

The programme which promises to take Lagos by storm will result in the salvation of many while serving as a platform to bring healing miracles to many who seek God’s divine intervention in their lives.

“It is our outreach programme that the spirit of God has inspired us to have. And our Man of God Pastor Chris Oyakhilome has blessed this programme. He gave the word and told us to go forth and hold the programme to touch the city of Lagos,” said Pastor Vale Odu-Thomas, Zonal Director, Christ Embassy Lagos Zone2.

Pastor Paul Ndubuisi who is chairman of the planning committee said: “Every time the Spirit of God gives instruction through our man of God for us to organise a meeting like this we know that it is because of what the Lord wants to accomplish for His people and all who will attend. This is the set time for the city of Lagos to be touched by God in a very special way.”

“It is not a coincidence that we are having this programme in the month of April which has been declared by the Spirit of God through our man of God as our Month of Lifting. So, we are certain that despite the socio-economic challenges in the country at the moment, God is sending help through His Word during this programme to the several thousands who will be in attendance,” he added.

Speaking further, he said that according to the Word of the month, God told us through our man of God Rev Dr Chris Oyakhilome that when others are saying that there is a casting down, we shall say there is a lifting up. And only the Spirit of God can bring about this in the life of a man at this time. This is why we are very confident that the Lord will do great and mighty things in the midst of His people at the Night of Bliss Special with Pastor Vale Odu-Thomas, holding this Friday.”

“Prayer rallies have held many times at the venue of the programme and other centres in preparation for the Night of Bliss Special and during these prayer sessions we have received express words of prophecy concerning the meeting and we are glad that we are a part of an epoch-making event like this.”

Already, several thousands of people have been calling the seat reservation numbers to indicate their readiness to attend the life-changing meeting. As they make contact with our Call Centres, they express excitement ahead of the programme and even say that they can’t wait for the day of the programme to come.

As we speak, our call centre set up to manage the seats reservation is constantly being bombarded with calls from all parts of Lagos and even outside of the city, by those who have concluded plans to attend.

The planning committee chair also disclosed other activities being put in place to ensure that all who will be in attendance will have an unforgettable experience at the Night of Bliss Special.

According to him, adequate bus transportation arrangements have been put in place to ensure from any part of the city of Lagos you choose to come from, free bus rides are available. And these buses are branded with conspicuous banners of the programme.

To further make things easy, we have provided phone lines in all our promos and publicity materials for people to call to know the nearest pick up point to them. This he said will also go a long way in helping to manage the traffic situation around the venue as “people don’t necessarily have to come with their cars.”

Adequate security arrangements have been put in place as officers and men of the Lagos Police Command, Counter Terrorism Unit, Department of State Services (DSS) among others have been mobilized by their various high commands to ensure a hitch-free event.

Also, operatives of the Lagos State Traffic Management Authority (LASTMA) will be on ground to ensure free flow of traffic within the venue and access routes to the Lagos International Trade Fair Complex.

ALSO SEE: This is a Night of Bliss of soulwinning, healing, miracles — Pastor Ndubuisi

Meanwhile, publicity efforts have reached top gear as several billboards with large banners of the programme have been mounted at various strategic locations in Lagos. BRT buses covering several routes were seen branded with the banners of the Night of Bliss Special.

Similarly, almost every radio station now airs jingles of the programme while the Television Stations air the promos. The Social Media space and indeed the Internet is buzzing with enthusiastic discussions on the expectations by those who have made plans to attend.

Anointed world-class music ministers like Chris Shalom, Joepraize, Ada, Buchi and many others will be singing.