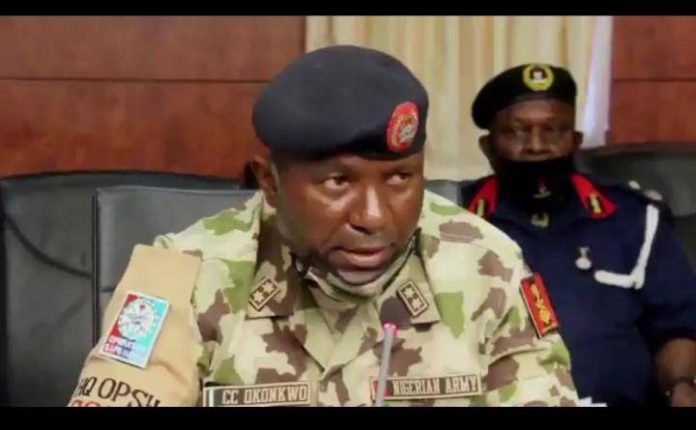 Share this on WhatsApp
By Kingsley Chukwuka, Jos
Maj. Gen. Chukwuemeka Okonkwo, the Commander, Special Task Force (STF) maintaining peace in Plateau, on Friday charged youths to see themselves as ambassadors of peace for stability in the North-central State.
Okonkwo gave the charge in Jos after quelling the tide of the rampaging youths who went about looting warehouses and private properties belonging to politicians and individuals.
The General said the STF is determined to restore peace to the crisis-ridden north-central state and is ready to tackle every hindrance, hancumbrances to peace.
“We are focused on restoring stability and shall remove every encumberance on our path”.
Okonkwo who also spoke on the peaceful just concluded Eid-Maulud said the Sallah celebration was a sign that Plateau youths are determined to embrace peace.
“Peace is a process and we are determined to eliminate all the encumbrances so that the larger percentage of the population will be able to coexist peacefully.
“Every hindrances to the peace of this State will be removed, no matter who is involved.
“Whatever is going to be an impediment, especially for those in the hinterlands to sleep, woke up and go about their businesses peacefully, we will take it out.
The commander stated that the STF had discovered few elements within the society who were manipulating the naivety of some people to promote violence.
He expressed optimism that violence will be highly minimize because Plateau had turned a new curve that enthroned a new beginning of understanding and tolerance.
“As you witness, there is not much of angst on the Plateau yesterday during the Sallah celebration because there is a greater understanding among people of different tribes and among religious divides.
“We will be building on it more tacitly so that everything on the Plateau will go back to what it used to be.
“The time is up for trouble makers because there is greater understanding for tolerance and peaceful coexistence.
“People are traversing all parts of the state now unmolested, except for the few incidences of cult activities some of which we have arrested and promptly dealt with,” Okonkwo said.
Share this on WhatsApp