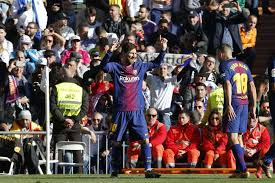 Barcelona produced a superb away performance to secure a victory over Real Madrid that all but eliminates their arch rivals from the Spanish title race.

A second-half Luis Suarez strike and Lionel Messi’s penalty, after Dani Carvajal was sent off for handball, helped move Barca nine points clear of Atletico Madrid at the top of La Liga, and increased their advantage over defending champions Real to 14 points.

Karim Benzema hit the post and Cristiano Ronaldo missed two good chances in the first half, but the home side were blown away after the restart in the first El Clasico meeting of the Spanish league season.

Los Blancos started with Gareth Bale on the bench, and although he forced a save form Marc-Andre ter Stegen having been brought on following Carvajal’s dismissal, the Wales forward was unable to spark a comeback.

Instead, late substitute Aleix Vidal added further insult in injury time with a third for Barca, as his shot from inside the box squeezed over the line after Messi’s cut-back, despite the Argentine losing his boot in the build-up to his 200th assist for the club.

It is the first time Barca have won three consecutive away league matches at the Bernabeu, and the result leaves Zinedine Zidane’s side fourth in the table.

One week after Madrid added a second successive Club World Cup title to the two Champions League titles won in a row under Frenchman Zidane, any hopes of clawing their way back towards a defence of last year’s league title must now be extinguished.

Saturday’s match, arranged for a 12:00 GMT kick-off to attract as wide a global TV audience as possible – Spanish newspaper Mundo Deportivo estimated there would be 650 million viewers – was a chance to narrow the gap on Barca to eight points with victory.

Those watching around the world and the 80,264 fans inside the ground saw the home side start the better, but fail to make their superiority count.

Inside two minutes Ronaldo nodded in off the crossbar but saw his effort correctly ruled out for offside, before the 2017 Ballon d’Or winner swiped at thin air in the box with his left foot when set up by Toni Kroos.

With Messi tightly marked, it was Paulinho who threatened for Barca, twice drawing good saves from Keylor Navas before Benzema outmuscled Thomas Vermaelen to stoop and head against the base of the post.

After the restart, however, the game followed a markedly different pattern.

With the half just nine minutes old, Madrid were left horribly exposed after Ivan Rakitic was allowed to run through the heart of a midfield that had been set up with the idea of containing Messi paramount – with roles for Casemiro, Mateo Kovacic, Kroos and Luka Modric.

Rakitic found wing-back Roberto, and Suarez finished the move off crisply for his 10th of the season – before the game’s key moment arrived nine minutes later.

After Messi found Suarez with a through pass, the Uruguayan twice had the chance to beat Navas in a one-on-one. He was first denied by the keeper, then saw his shot strike the post.

As the rebound came back, Paulinho lunged to head on goal and Carvajal instinctively trusted his hand to block – Navas would have considered it a fine save.

The Spain defender was shown a straight red card, leaving his side hamstrung in their search for a way back in.

Bale, yet to force his way back in to a regular starting slot following his latest spell out injured, was one of three changes made by Zidane after his side went down to 10.

He perhaps should have been more composed when found free in the box late on, but this victory was a deserved one for Barca.

Ernesto Valverde’s side remain unbeaten in the league this season – they have won 14 and drawn three since their 5-1 aggregate defeat by Madrid in the two-legged season-opening Spanish Super Cup in August.