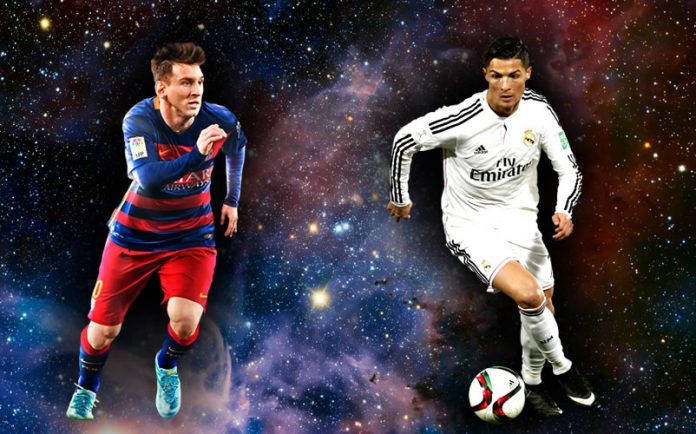 Share this on WhatsApp
Spread the love
Cristiano Ronaldo and Lionel Messi are set to be tracked by a dedicated player camera during Saturday’s  Clasico showdown, The Independent reports.
Real Madrid and Barcelona meet at  Bernabeu, with the Catalans currently leading their long-term rivals by eight points.
Real captain Sergio Ramos has admitted it’s a game his side are “obliged” to win “in order to remain in the fight for La Liga”.
ALSO SEE: Barcelona head to Bernabeu with third highest points
To add an additional dimension to the coverage of  the  match, “two cameras will get up-close and personal” with both Ronaldo and Messi across the 90 minutes.
“Two cameras will get up-close and personal with the Portuguese striker and the Argentine forward, allowing supporters to feast their eyes on every last move made by the global stars,” La Liga confirmed in a statement.
A pair of cameras will also be focused on managers Zinedine Zidane and Ernesto Valverde.
“The same applies to the two men in the dugouts, with a pair of cameras set to be trained on Zinedine Zidane and Ernesto Valverde right from the first whistle.
“In an effort to make television viewers feel as if they were lapping up the action from a seat in the stands, the Bernabeu is also to be equipped with a virtual Be The Player camera, which features Intel’s 360° technology and represents a first for a La Liga broadcast.
“This camera captures events from the player’s perspective, offering spectators the same view of the match as their heroes.”
Messi is on course to start in the  clash though Ronaldo remains a doubt due to injury concerns.
Share this on WhatsApp