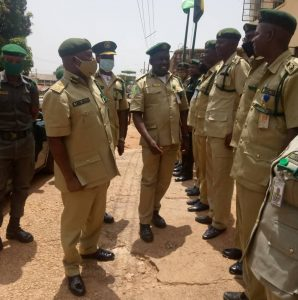 Mr Bomoi Bello, the Zonal Coordinator in charge of Zone ‘H’ of the Nigerian Correctional Service (NCoS) has warned personnel of the service to shun trafficking and other acts that would be inimical to its progress and growth of the society.

Bello, an Assistant Controller General (ACG), gave the advice while addressing personnel of the Plateau command at the end of his visit to the command on Wednesday in Jos.

ASC Geofrey Longdiem, the Command’s Public Relations Officer (PRO) in a statement said the visit was part of the coordinator’s routine inspection tour of all commands under his control.

Longdiem said the coordinator also warned the personnel to desist from any other act that would dent their personal image and that of the service.

According to him, Bello also maintained that any personnel caught in any criminal act would be made to face the full wrath of the law.

“The Zonal Coordinator in charge of Zone ‘H’, ACG Bomoi Bello, as part of his statutory functions visited the Plateau Command of the NCoS

“The ACG appreciated the Controller of the Command, Mr. Samuel Aguda, and personnel for maintaining peace and stability in all the formations and Custodial Centres in the state.

“He admonished officers to continue in that light, but warned them to shun trafficking and shy away from any activity that will be discrediting them and the image of the service,” the statement said.

Longdiem said high points of the visit were the inspection of books and facilities across the state by the zonal coordinator, as well interaction with both personnel and inmates.

The News Agency of Nigeria (NAN) reports that the Zone H of the service consists of Benue, Nasarawa, Kogi and Plateau states.