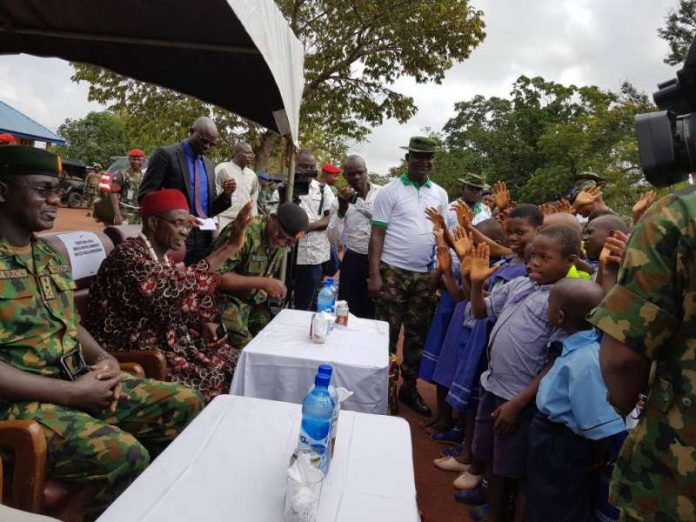 Share this on WhatsApp
Spread the love
As part of welfare package to reach local community where the “Operation Python Dance 2” is ongoing in the South East, the Nigerian Army has flagged off a free medical service in Ovim, Isuikwuato Local Government Area of Abia.

The Deputy Director, Army Public Relations, 82 Division, Col. Sagir Musa, said in Enugu said the exercise has been a success.
During the medical service witnessed by the former Chief of Army Staff, Lt Gen. Azubuike Ihejirika, whose town the retreat took place expressed joy with the level of medical care extended to the local community.
Col. Musa reiterated that the free medical programme was based on the directive of the Chief of Army Staff, Lt Gen Tukur Buratai.
He explained, “One interesting aspect of the exercise is the generous donations of rice, dental and optometry services, malaria and de-worming tablets, eye glasses, treated mosquito nets to the locals, among others.
ALSO SEE: Police nab violent masquerades in Lagos
“In addition to the de-worming tablets, school children were given packets of biscuits, chewing gum and chocolates,” Musa said.
Meanwhile, Musa pointed out that Corps Commanders of the Nigerian Army training institutions have been visiting areas covered by Operation Python Dance II.
Noting that such visits by the Commanders was to enable them interact with the troops and assess the success of the ongoing exercise.
Already, the Commanders were conducted round some field locations and check-points along Enugu-Nsukka and Enugu-Abakaliki axis.
Musa further added that the Commandant, Nigerian Army College of Logistics, Maj Gen. RC Duru, has visited Sector 2 Operational Headquarters, where he was briefed on the exercise in addition to been conducted round the hitherto volatile areas of Ohaji Egbema in Imo State.
Share this on WhatsApp