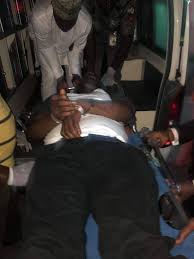 Kogi Sen. Dino Melaye has been hand-cuffed on his hospital bed at the National Hospital, Abuja.
Visitors, including colleagues from the Senate were not allowed to see him either.
The latest development followed Melaye’s attempt to escape police custody while he was been whisked to Lokoja on Tuesday.
After sustaining injury and checking to a private hospital, the police reinforced and forcibly evacuated him to the National Hospital where he was taken in to Trauma Centre on Tuesday night.
The federal lawmaker landed in trouble for spurning police invitation since March when he was alleged to have armed and financed a killer gang in Kogi.
The senator, however, denies that, saying it is all the handiwork of Kogi Gov. Yahaya Bello and other political enemies.