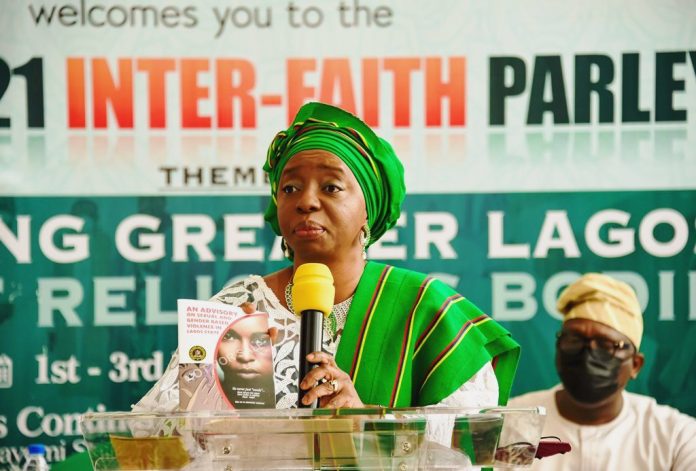 The First Lady of Lagos State, Dr. Ibijoke Sanwo-Olu, on Friday appealed to religious and community leaders in the state to join the ongoing massive campaign to end violence against women and girls, especially, rape and all forms of sexual and gender-based crimes.

Dr. Sanwo-Olu also enjoined parents and guardians to be watchful and do everything necessary to protect their children and wards from sexual predators.

The First Lady at the Interfaith Parley of Religious Leaders with Governor Babajide Sanwo-Olu, organized by the Lagos State Ministry of Home Affairs, at Intercontinental Hotel, Victoria Island, Lagos, said that as the first point of call in the communities, religious and community leaders have key roles to play in stepping up the fight against rape, defilement, and associated crimes.

The First Lady also at the official flag-off of Maternal, Newborn, Child and Adolescent Health Week at Ikorodu, declared: “There is a zero-tolerance to rape in Lagos State. We are serious about stamping out domestic violence, gender-based violence, and associated crimes in Lagos. We don’t pray for rape and similar crimes but they do happen and most times religious leaders and community leaders are the first point of contact.

“When you have such cases at hand, whoever has been attacked should not bathe, douche and they should not change their clothes. If the rapist used a condom, and you have it, do not destroy it but go straight to the hospital to have a test in order to preserve the evidence.

“If a child is raped and the mother quickly bathes for her, you have lost the evidence and you can’t win the case because you don’t have evidence. So, when you are talking to people in our communities, please mention these things.”

Alluding to the ongoing annual 16 days of activism against SGBV as championed by the United Nations, the First Lady said a lot had been done in Lagos State to fight the menace, including the new law that now supports the Sex Offenders Register.

“I just came back from the meeting of the Nigeria Governors’ Wives Forum in Abuja this morning and the issue of Gender-Based Violence was heavily discussed. We are all united in the crusade against the menace.

“This is the era of speaking up loud and clear. Sexual harassment in the workplace, in the school, in the community must not be encouraged. These are some of the things we want our religious leaders to talk about.

“Honestly, it’s better for that child to fail than to surrender her body. There is no shame in failing. When you fail, it is an opportunity to do it again. We need to preach that when we are talking in our communities,” Dr. Sanwo-Olu said.

The First Lady said that through a multi-sectoral stakeholders’ initiative coordinated by her office, it was gratifying that commendable feats had been achieved, adding that the state now has more Sexual Assault Referral Centres (SARC) and funding to support survivors, among others.

Dr. Sanwo-Olu also emphasized the need for people who are yet to be vaccinated against COVID-19 to do so without delay, saying it is better to be safe than sorry.

“There is a lot of vaccination and I need to encourage people to go and get vaccinated. It has been proven that even if you now get it, your immunity is being boosted so that you can fight it.

“Now, not much is known about the severity of the new Omicron variant but a lot of research is going on. The bottom line is that people in our communities should get vaccinated. There is a lot of apprehension in our communities about vaccination but I am a Medical Doctor and I know that it is better to be safe than sorry,” the First Lady said.